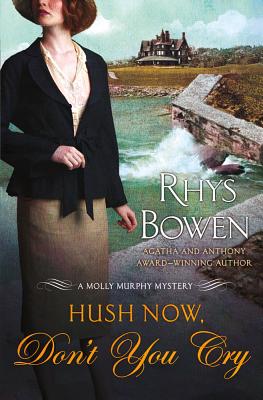 In the latest in Rhys Bowen's award-winning historical series, Molly Murphy is supposed to give up sleuthing now that she's married, but the murder of an alderman puts her on the trail of a killer.

Molly Murphy, now Molly Sullivan, and her husband Daniel, a captain in the New York Police department, have been invited to spend their honeymoon on the Newport, RI, estate of Alderman Brian Hannan in the spring of 1904. Molly doesn't entirely trust the offer. Hannan--an ambitious man--has his eye on a senate seat and intentions of taking Tammany Hall to get it. When Hannan is found dead at the base of the cliffs that overlook the Atlantic, Molly's suspicions are quickly justified, and as much as she wants to keep her promise to Daniel that she won't do any more sleuthing now, there isn't much she can do once the chase is on. Rhys Bowen's brilliant wit and charm are on full display in Hush Now, Don't You Cry, another outstanding addition to her Agatha and Anthony award-winning historical series.

Praise for Rhys Bowen
“Molly's compassion and pluck should attract more readers to this consistently solid historical series.”—Publishers Weekly on Bless the Bride

"This historical mystery delivers a top-notch, detail-rich story full of intriguing characters. Fans of the 1920s private detective Maisie Dobbs should give this series a try.”—Booklist on The Last Illusion

Rhys Bowen is author of the Anthony and Agatha Award-winning Molly Murphy mysteries, the Edgar Award-nominated Evan Evans series, and the Royal Spyness series. Born in England, she lives in San Rafael, CA.
Loading...
or
Not Currently Available for Direct Purchase