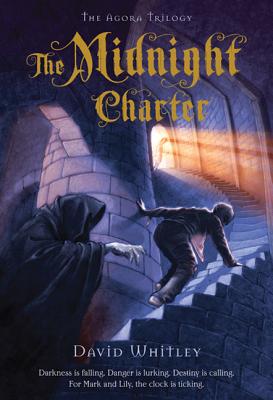 The Midnight Charter (The Agora Trilogy #1)

“The Midnight Charter brilliantly shows the struggle between the powers of greed, ambition, and profit against charity, compassion, and selflessness, all set in the city of Agora -- -- where two young people battle to survive and find their place. Whitley's story will transport you and, at the same time, inspire. I've never been so impatient to read the next installment in a phenomenal tale.”
— Becky Anderson, Anderson's Bookshop, Naperville, IL
View the List

In this spellbinding fantasy novel, newcomer David Whitley has imagined a nation at a crossroads: misshaped by materialism and facing a choice about its future. He has brought to life two children who will test the nation's values-and crafted a spellbinding adventure story that will keep readers turning the pages until the very end.

In a society based on trade, where everything can be bought and sold, the future rests on the secrets of a single document-and the lives of two children whose destiny it is to discover its secrets.

THE MIDNIGHT CHARTER combines great storytelling with a compelling vision - a many layered adventure with powerful and timely implications.


Praise For The Midnight Charter (The Agora Trilogy #1)…

“Young readers who enjoy tales of mystery and fantasy will find much to admire in Whitley's story...Simon Vance's thoughtful, unrushed narration is the perfect foil for the book's brooding atmosphere. Vance is a master narrator who brings characters of every type to life.” —AudioFile

“[Simon Vance's] skill is his ability to provide just the perfect pace and emphasis to convey wonder and amazement as well as dismay and disbelief... His almost imperceptible change in pacing, pitch, and rhythm perfectly conveys the author's intent.” —Voya Voice of Youth Advocates

“Charity, greed, freedom, fate and political scheming are all woven through debut author Whitley's richly conceived world. Readers will be buoyed by every small triumph that cannot be recorded in an account book.” —Publishers Weekly

“Exciting and gripping from the first heart-stopping line, this first book in a trilogy takes readers only part of the way to resolving the predictions of the Midnight Charter and its relationship to Mark and Lily. Readers will anxiously await the next installment as they reach the cliff-hanger ending.” —School Library Journal

“Deft world-building and crafty plotting combine for a zinger of an ending that will leave readers poised for book two. Surprisingly sophisticated upper-middle-grade fare, with enough meat to satisfy older readers as well.” —Kirkus Reviews

“Whitley threads together a thrilling page-turner with the two young heroes' lives intertwining in surprising and illuminating ways.” —Shelf Awareness

“One of the most original and creative books I've read in a long time.” —Wands and Worlds.com

David Whitley was born in Chester in 1984 and graduated from the University of Oxford with a double First in English Literature and a passion for writing Children’s fiction.  At age 17 his first children’s novel was shortlisted for the Kathleen Fidler Award and at 20 he won the Cheshire Prize for Literature for a children’s short story, the youngest writer ever to win this prestigious award. Presented by Children’s Laureate Michael Morpurgo, who said some very complimentary words, the award was sponsored by Maryland Bank of North America and the £2000 prize helped David to spend a postgraduate year writing The Midnight Charter.  Whilst his first and overriding aim is to write fiction, David is also a scholar, particularly interested in the works of Jonathan Swift and his contemporaries; he had just received an offer of a place at Oxford to study for a Master’s Degree when his book was picked up by Puffin and Roaring Brook Press.  Although David’s primary medium is the written word, he is no stranger to performance. As well as straight acting, he is an in-demand bass-baritone having taken several leading roles in musical theatre. David’s numerous ‘serious’ music credits include Masetto in Mozart’s Don Giovanni for Carte Blanche Opera and concert performances of Tosca, Tannhauser and Peter Grimes under the baton of the late Richard Hickox, musical director of Opera Australia. As well as appearing on stage himself, he has also enjoyed directing youth drama. In his home town he has worked with The King’s Players to direct and produce two musicals and a play between 2006 and 2009, including Sondheim’s Assassins and Into the Woods. David loves giving readings of his stories, to audiences of all ages.
Loading...
or support indie stores by buying on