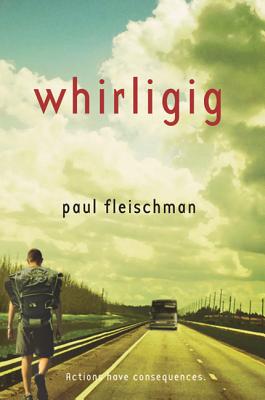 With a family always on the move, popularity and the ability to fit in quickly are vital to Brent Bishop's high school survival. When he blows his chances with the girl of his dreams in front of everyone, he's devastated. Brent tries to end it all in a fatal car crash, but instead he finds an unlikely beginning. He's sent on a journey of repentance—a cross-country trip building whirligigs. His wind toys are found by people in need: a Maine schoolgirl yearning for her first love, a Miami street-sweeper desperate for peace and quiet, a kid in Washington who just wants to play baseball, and a San Diego teenager dealing with loss. Brent's whirligigs bring hope to others, but will they be able to heal the wounds deep inside himself?

“Complex and rewarding, this is a stellar addition to a consummate writer's body of work.” —Publishers Weekly, Starred Review

“This is a cathartic story of redemption. Brent, filled with self-doubt, guilt, and a host of worries, is a character today's adolescents will recognize and agonize with. Fleischman's writing is filled with beautiful imagery, no more so than in the twirling arms of his whirligigs that remind readers that sustaining the human spirit in an imperfect world requires reaching out to others.” —Voice of Youth Advocates

“Though Whirligig has linear movement, it impresses readers more with its sense of interconnected spiraling. . . . There is enormous vitality and hopefulness expressed in this brief masterwork.” —School Library Journal

“In an intricately structured novel, Fleischman skillfully connects the stories of several people to the evolution of his main character. . . . Brent's journey is an embracing and an edifying one.” —The Horn Book

“The story as a whole and the inner sense of self that Brent achieves through his experiences are mesmerizing. The language of the whirligig stories gleams and soars: a metaphor of movement, dance, laughter, and irrepressible life.” —Booklist

Paul Fleischman won a Newbery Medal for Joyful Noise and a Newbery Honor for Graven Images. He is also the author of young adult novels including Whirligig and The Mind's Eye, and middle-grade novels including Bull Run and Seedfolks. He lives with his wife in northern California.
Loading...
or
Not Currently Available for Direct Purchase