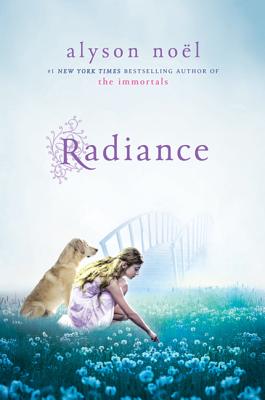 Riley has crossed the bridge into the afterlife—a place called Here, where time is always Now. She has picked up life where she left off when she was alive, living with her parents and dog in a nice house in a nice neighborhood. When she's summoned before The Council, she learns that the afterlife isn't just an eternity of leisure. She's been assigned a job, Soul Catcher, and a teacher, Bodhi, a possibly cute, seemingly nerdy boy who's definitely hiding something. They return to earth together for Riley's first assignment, a Radiant Boy who's been haunting a castle in England for centuries. Many Soul Catchers have tried to get him to cross the bridge and failed. But all of that was before he met Riley . . .

Radiance is the first book in the Riley Bloom series from bestselling author Alyson Noël.

“Riley, who appeared in ghost form to her older sister, Ever, in Noël's bestselling Evermore, takes center stage in this middle-grade spinoff, first in a planned series. . . . her wit, attitude, and maturation should have readers gladly following her into the second installment.” —Publishers Weekly

“I must admit there is not one thing I don't like about this book. I just listed it all the pros and there are no cons. I would rate it FIVE STARS if I was a critic. And I guess I am. Now I have something to look forward to, the second book coming out in Spring 2011.” —Hadley, at AllyKatzz.com

“I like Riley . . . She's faced with challenges and loves to meet them head-on. I'm very pleased with this book. . . . Riley's story is touching, moving, and uplifting.” —Biliophilic Book Blog

“Narrating in a contemporary voice with an honest and comfortable cadence, Riley is imperfect, but always likable as she sweeps readers to her faraway land where she makes herself and readers assess their behaviors and, quite possibly, make adjustments. In the midst of this wildly fanciful setting, Noël is able to capture with nail-on-the-head accuracy common worries and concerns of today's tweens.” —School Library Journal

“A tale for lovers of the genre . . . For those preteens who like a mild supernatural adventure with romantic overtones, you go, ghost.” —Kirkus Reviews

“Riley is such a great, refreshing character and I loved her voice. She has some great inner monologues that made me laugh out loud . . . I really enjoyed Radiance . . . I'd definitely recommend YA fans of Alyson Noël to pick it up. I'm looking forward to finding out what happens next with Riley and Bodhi.” —Mundie Moms

“Alyson did a great job writing Radiance. It was what I expected and more . . . She was able to catch that young voice and portray it beautifully. . . . Radiance is a great summer read. I give it 5 BITES!” —Books With Bite

“Another highly creative and well thought out series for Alyson Noël! . . . Noël creates another imaginative world that is so well described it sucked me in from the very beginning. She has a very poetic style of writing that will appeal to any age . . . I highly recommend.” —Bellas Novella

“Radiance is a sweet story, a perfect summer read . . . Like the Immortals series, Noël's world building is superb. Radiance was the perfect book to tide me over until the next Immortals book comes out. As far as middle-grade books go, it's one of the best I've read.” —I'd So Rather Be Reading

“I think I found a great new series with tons of potential, and that series starts with Radiance . . . This book is so cute!” —Bloody Bookaholic

“I loved reading this book! . . . Its beauty and simplicity blend perfectly with romance and humor. I'm sad that I must wait until next year for Shimmer, the sequel. I will definitely miss Riley, Bodhi, and Buttercup! Also the cover is just beautiful!” —Novel Thoughts

“The author has a way of making the world she has created come off the pages and into your mind! A book that will keep you captivated from page one until Riley's flight of Radiance at the end!” —My Overstuffed Bookshelf