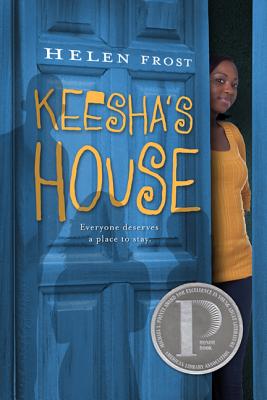 Keesha has found a safe place to live, and other kids gravitate to her house when they just can't make it on their own. They are Stephie – pregnant, trying to make the right decisions for herself and those she cares about; Jason – Stephie's boyfriend, torn between his responsibility to Stephie and the baby and the promise of a college basketball career; Dontay – in foster care while his parents are in prison, feeling unwanted both inside and outside the system; Carmen – arrested on a DUI charge, waiting in a juvenile detention center for a judge to hear her case; Harris – disowned by his father after disclosing that he's gay, living in his car, and taking care of himself; Katie – angry at her mother's loyalty to an abusive stepfather, losing herself in long hours of work and school.

Stretching the boundaries of traditional poetic forms – sestinas and sonnets – Helen Frost's extraordinary debut novel for young adults weaves together the stories of these seven teenagers as they courageously struggle to hold their lives together and overcome their difficulties.

Keesha's House is a 2004 Bank Street - Best Children's Book of the Year.

“Frost has taken the poem-story to a new level with well-crafted sestinas and sonnets, leading readers into the souls and psyches of her teen protagonists . . . engaging.” —School Library Journal, Starred Review

“This moving first novel tells the story in a series of dramatic monologues that are personal, poetic, and immediate.” —Booklist

“Making the most of the poetic forms, the author breathes life into these teens and their stories, resulting in a thoughtfully composed and ultimately touching book.” —Publishers Weekly

Helen Frost is the author of several books for young people, including Hidden, Diamond Willow, Crossing Stones, The Braid, and Keesha’s House, selected an Honor Book for the Michael L. Printz Award. Helen Frost was born in 1949 in South Dakota, the fifth of ten children. She recalls the summer her family moved from South Dakota to Oregon, traveling in a big trailer and camping in places like the Badlands and Yellowstone. Her father told the family stories before they went to sleep, and Helen would dream about their travels, her family, and their old house. “That’s how I became a writer,” she says. “I didn’t know it at the time, but all those things were accumulating somewhere inside me.” As a child, she loved to travel, think, swim, sing, learn, canoe, write, argue, sew, play the piano, play softball, play with dolls, daydream, read, go fishing, and climb trees. Now, when she sits down to write, her own experiences become the details of her stories. Helen has lived in South Dakota, Oregon, Massachusetts, New York, Vermont, Scotland, Colorado, Alaska, California, and Indiana. She currently lives in Fort Wayne, Indiana, with her family.
Loading...
or
Not Currently Available for Direct Purchase