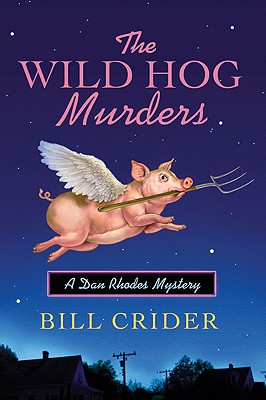 Like most of the rest of Texas, Blacklin County is being overrun with feral hogs that destroy farmland and crops. There's hardly any defense against these pests, but they haven't been the cause of murder. Until now. A mother and son have opened an animal shelter in the county and they welcome even feral hogs. Someone's threatened them by slaughtering one of their animals and leaving it on their doorstep. Then Sheriff Dan Rhodes and Deputy Ruth Grady stumble across a dead man while searching the woods for a convenience store robber.

The investigation into the man's death is complicated by angry hog hunters, a crusading talk-show host, a bounty hunter named Hoss, conflicts with the county commissioners, and the reappearance of Rapper and Nellie, the inept two-man motorcycle gang that's caused Rhodes considerable trouble in the past. By the time he's sorted through all the clues, Rhodes discovers that quite a few people aren't who they seemed to be, including those he's known for a long time. And some of them are killers.

Award-winning author Bill Crider has written an endearing and consistently entertaining series, and "The Wild Hog Murders" offers a fresh new chance to get in on the fun.


Praise For The Wild Hog Murders: A Dan Rhodes Mystery…

"Series fans will enjoy this shaggy hog story."--Publishers Weekly "On a day I should have been working, I dove into Bill Crider's The Wild Hog Murders and didn't surface until it was finished. Like all the Sheriff Rhodes books, it was a delight. Crider is the champ at combining good, old-fashioned mystery elements with the modern crime novel. And better yet, his hero, Sheriff Dan Rhodes, is a living breathing character that I wish was my next door neighbor."-- Joe R. Lansdale, Edgar Award-winning author of The Bottoms "The Dan Rhodes mysteries are rich with rueful humor, sharp observations about the human condition and vivid portraits of small town life. Taken together they're a serious and important body of work. The Wild Hog Murders is especially good with a strong mystery, unforgettable characters and an opening chapter that made my head spin around. Masterful work."--Ed Gorman, Anthony and Shamus Award-winning author

Bill Crider is the winner of two Anthony Awards and is an Edgar Award finalist. He lives with his wife in Alvin, Texas.
Loading...
or
Not Currently Available for Direct Purchase