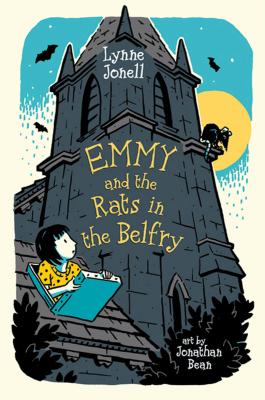 Emmy and the Rats in the Belfry

Don't miss the stunning conclusion to this magical middle grade series about a girl with special powers.

Emmy was not an ordinary girl. She could talk to rodents. She could shrink to the size of a rodent. And just a few weeks ago, she had even become a rodent to defeat her evil former nanny, Miss Barmy.

Emmy's parents, unaware of their daughter's other life, ship her off to visit two elderly aunts in Schenectady. Emmy figures her life will be ordinary at last, if rather boring. But she didn't count on her friend Ratty, whose search for his long-lost Ratmom brings him more than he bargained for.

Emmy and the Rats in the Belfry is the third book in the acclaimed Emmy series by Lynne Jonell, with art by Jonathan Bean. Look inside for flip book illustrations featuring soaring bats.

"A mystery is cleverly woven into this fun and, at times, hilarious caper, and children are likely to find themselves laughing out loud. . . . a delightful read." —School Library Journal, starred review

"Jonell takes readers on a merry, sometimes scary romp [that] turns smoothly on its fanciful premise and fabulous characters. As in so many stories featuring a rat, the sneaky rodent gets the best lines." —Booklist, starred review


Praise For Emmy and the Rats in the Belfry…

JONATHAN BEAN received an M.F.A. from New York's School of Visual Arts and now lives in Harrisburg, Pennsylvania. A two-time winner of the Boston Globe-Horn Book Award, for At Night and Building Our House, he is also the illustrator of Big Snow, two picture books by Lauren Thompson, and Bad Bye, Good Bye by Deborah Underwood.
Loading...
or
Not Currently Available for Direct Purchase