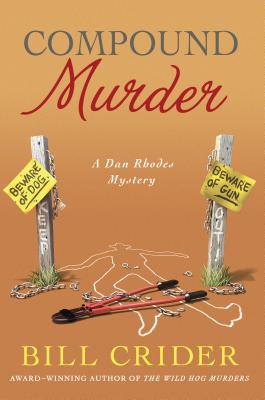 "Small-town Texas sheriff Dan Rhodes is in for another puzzling mystery in this next in the entertaining, award-winning series"

Before classes start one morning, the body of English instructor Earl Wellington is found outside the building of the community college. Wellington was clearly involved in a struggle with someone and has died as a result. Sheriff Dan Rhodes pursues and arrests Ike Terrell, a student who was fleeing the campus. Ike's father is Able Terrell, a survivalist who has withdrawn from society and lives in a gated compound. He's not happy that his son has chosen to attend the college, and he's even less happy with the arrest.

Rhodes discovers that Wellington and Ike had had a confrontation over a paper that Wellington insisted Ike plagiarized. Wellington also had had a confrontation with the dean and was generally disliked by the students. As the number of suspects increases, it's up to Rhodes to solve the murder while also dealing with an amusing but frustrating staff, a professor who wants to be a cop, and all the other normal occurrences that can wreak havoc in a small town.

Bill Crider's "Compound Murder" is an enjoyable police procedural filled with surprises, chuckles, and a quirky cast that will captivate mystery readers.

"Anthony Award–winner Crider’s 20th mystery featuring sheriff Dan Rhodes...offers the usual enjoyable combination of witty help from dispatcher Hack Jensen, minor crises like a hog loose in Hannah Bigelow’s house, the theft of hair extensions from Lonnie Wallace’s Beauty Shack, and a major crime or two....Rhodes, often embarrassingly compared to fictional sheriff Sage Barton, successfully emulates that action hero in the clever and satisfying resolution."—Publishers Weekly "Kudos to Crider for his 20th entry (after Murder of a Beauty Shop Queen)....As expected, humor and comfort are part of the mix."—Library Journal
"Since 1986, Crider of Alvin has been turning out novels in his Dan Rhodes series, about a sheriff in fictional Blacklin County who solves folksy mysteries involving barbershop quartets and beauty parlors. This twentieth installment finds Rhodes dealing with the murder of a college instructor, but  rest assured, the main character still finds time to ruminate about such Texas glories as his beloved—and now discontinued—Dublin Dr Pepper."—Texas Monthly

Bill Crider is the winner of two Anthony Awards and an Edgar Award Finalist. A college English professor for many years, he's published more than seventy-five crime, Western, and horror novels, as well as a number of children's books. He lives with his wife in Alvin, Texas.
Loading...
or
Not Currently Available for Direct Purchase