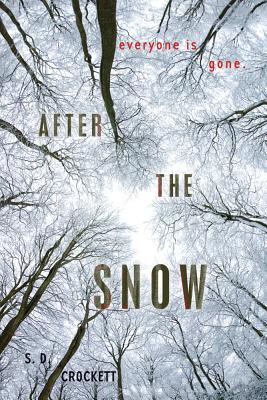 The oceans stopped working before Willo was born, so the world of ice and snow is all he's ever known. He lives with his family deep in the wilderness, far from the government's controlling grasp. Willo's survival skills are put to the test when he arrives home one day to find his family gone. It could be the government; it could be scavengers--all Willo knows is he has to find refuge and his family. It is a journey that will take him into the city he's always avoided, with a girl who needs his help more than he knows.

S.D. Crockett on narrative voice and an especially cold winter:

In my twenties I worked as a timber buyer in the Caucasus Mountains of southern Russia, and that work led to travels in Eastern Europe and Armenia. As soon as I step off the plane in those places it smells like home.

It may sound strange to say, when After the Snow is set in Wales, but really the practical dilemmas in the book come directly from places I've been, people I've lived with, and the hardships I've seen endured with grace and capability. I was in Russia not long after the Soviet Union collapsed and I've seen society in freefall. Without realizing it at the time I think those experiences led me to dive into After the Snow with real passion.

What would western civilization look like with a few tumbles under its belt? What would happen if the things we took for granted disappeared? I wanted to write a gripping story about that scenario, but hardly felt that I was straying into fantasy in the detail.

What do you want readers to most remember about After the Snow?
We all have the capacity to survive, but in what manner? What do we turn to in those times of trouble? Those are the questions I would like people to contemplate after reading After the Snow.

How did Willo's unique voice come to you?
Willo's voice appeared in those crucial first few paragraphs. After that it just grew along with his world and the terrible situations that arise. I think his voice is in all of us. We don't understand, we try to make good—maybe we find ourselves.

How did you stay warm while writing this novel?
I banked up the fire—and was warmed by hopes of spring.


Praise For After the Snow…

“Willo tells this dark story in a heavy, coarse, broken, but often beautiful dialect: “People always looking to find the runt in you and needle it out if they can.” It’s hard not to wonder at first whether Willo is perhaps a little slow or unbalanced. If so, he’s also gifted — not only in snaring wild game (“Gonna want to show him something clever you done, like catching a big hare”), but also in his keen observation — and he is a deeply lovable character. Crockett has created a voice that gets inside you, a voice that, though limited in vocabulary and perspective, achieves remarkable emotional range. And Willo proves the perfect narrator for this harrowing tale about the dangerous new world of Crockett’s invention…. After the Snow is a coming-of-age novel, first and foremost — a brutal, tough and sometimes truly transcendent one.” —New York Times Book Review

“In this powerful first novel, global warming has killed the North Atlantic Current, sending the U.K. and much of the U.S. into a new ice age.” —Publishers Weekly, Starred

“A sentimental tale of hardships, resilience and first-time experiences that illustrates a universal truism: Hope springs eternal in the young.” —Kirkus, Starred

“...marks Crockett as a writer to watch.” —Booklist

“What elevates Snow is the voice Crockett uses to tell the tale.” —School Library Journal, Starred

After the extremely hard winter of 2009, S. D. Crockett asked herself, "What if winter never ended?" and from that thought, her debut novel, After the Snow, was born. Crockett lives in the United Kingdom.
Loading...
or
Not Currently Available for Direct Purchase