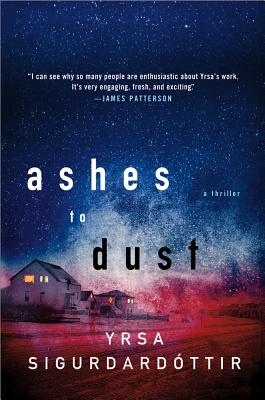 "I can see why so many people are enthusiastic about Yrsa's work. It's very engaging, fresh, and exciting." -- James Patterson

One of the finest Nordic crime writers working today, Yrsa Sigurdardóttir has been published to rave reviews worldwide. Now, with Ashes to Dust, she delivers a dynamite and timely thriller set at the site of a volcano.

In 1973, a volcanic eruption buried an entire Icelandic village in lava and ash. Now, hoping to make some cash, a crew is assembled to excavate the site and turn it into a tourist destination. Markús, who was a teenager when the volcano erupted, enlists the help of attorney Thóra Gudmundsdóttir to try to prevent the excavation from going forward.

When the digging continues and three fresh bodies (and a spare head) turn up in the basement of Markús' childhood home, Thóra begins to question Markús' motives for wanting to stop the excavation. His explanation for the bodies is complicated, and the locals seem oddly reluctant to back him up. As Markús' story begins to unravel, Thóra finds herself with an impossible task, defending Markús while trying to solve a quadruple murder that may very well implicate her client.

With unforgettable characters, unexpected twists, and superb psychological suspense, Ashes to Dust is a riveting thriller from a new international star.


Praise For Ashes to Dust: A Thriller (Thora Gudmundsdottir #3)…

“Excellent... Sigurdardóttir uses Iceland's past and present to full effect in this tale of hidden crimes and family secrets. Even those unfamiliar with this volcanic island nation will find themselves entranced.” —Publishers Weekly (starred)

“Buried under all the volcanic ash, false trails and endless recriminations is a puzzle whose grim solution is worthy of Stieg Larsson.” —Kirkus

“This darkly atmospheric psychological suspense is full of unusual characters, as well as numerous surprising twists and turns.” —FreshFiction.com

“A fine mix of crime and vividly realized landscape.” —Booklist

“Icelandic volcanic explosion provides a timely background... the chaos and panic caused by the 1973 eruption are vividly evoked in Yrsa Sigurdardóttir's novel.” —The Independent (UK)

“A fascinating setting and realistic characters make this an engrossing read -- and Sigurdardóttir maintains the intrigue as her clever plot unravels.” —Metro (UK)

“Iceland's answer to Stieg Larsson.” —The Telegraph (UK) on the Novels of Yrsa Sigurdardóttir

“Stands comparison with the finest contemporary crime writing anywhere in the world.” —The Times Literary Supplement (UK) on the Novels of Yrsa Sigurdardóttir

“Sigurdardóttir delivers terrific clammy atmosphere and frequent frissons of fear; she is entitled to join the front rank of Nordic crime writers.” —The Times (UK) on the Novels of Yrsa Sigurdardóttir

“Brilliantly plotted and chilling.” —The Daily Mirror (UK) on the Novels of Yrsa Sigurdardóttir

“Thora is an attractive heroine; she's practical, capable and intelligent as well as having a dry sense of humor and an enquiring mind….She's curious about everything.” —EuroCrime.com on Last Rituals

“The writing is distinguished by superb evocations of extraordinary landscapes.” —The Independent (UK) on My Soul to Take

“Icelandic attorney Thóra Gudmundsdóttir is a clever and astute woman, and a welcome addition to the pantheon of fictional female investigators.” —RT Book Reviews (four stars) on My Soul to Take

YRSA SIGURDARDÓTTIR (pronounced UR-suh SIG-ur-dar-daughter) lives with her family in Reykjavík; she is also a director of one of Iceland's largest engineering firms. Her work is found on bestseller lists all over the world, and films are currently in production for several of her books. Her titles include, The Day is Dark and Ashes to Dust.
Loading...
or support indie stores by buying on