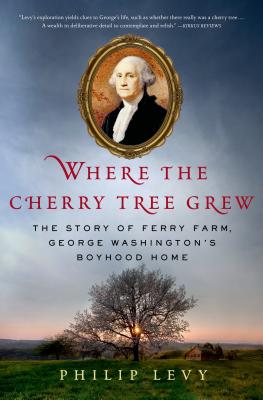 Where the Cherry Tree Grew (Hardcover)

In 2002, Philip Levy arrived on the banks of Rappahannock River in Virginia to begin an archeological excavation of Ferry Farm, the eight hundred acre plot of land that George Washington called home from age six until early adulthood. Six years later, Levy and his team announced their remarkable findings to the world: They had found more than Washington family objects like wig curlers, wine bottles and a tea set. They found objects that told deeper stories about family life: a pipe with Masonic markings, a carefully placed set of oyster shells suggesting that someone in the household was practicing folk magic. More importantly, they had identified Washington's home itself—a modest structure in line with lower gentry taste that was neither as grand as some had believed nor as rustic as nineteenth century art depicted it.

Levy now tells the farm's story in Where the Cherry Tree Grew. The land, a farmstead before Washington lived there, gave him an education in the fragility of life as death came to Ferry Farm repeatedly. Levy then chronicles the farm's role as a Civil War battleground, the heated later battles over its preservation and, finally, an unsuccessful attempt by Wal-Mart to transform the last vestiges Ferry Farm into a vast shopping plaza.

PHILIP LEVY holds a Ph.D. in history from the College of William and Mary and is currently associate professor of history at the University of South Florida, where he teaches early American history, public history, and historical archaeology. He is the 2004 recipient of the Virginia Historical Society’s prize for best article of the year, and the author of the book Fellow Travelers: Indians and Europeans Contesting the Early American Trail. He lives in Florida.

Praise For Where the Cherry Tree Grew: The Story of Ferry Farm, George Washington’s Boyhood Home…

"A wealth in deliberative detail to contemplate and relish."—Kirkus Reviews
or support indie stores by buying on
Copyright © 2020 American Booksellers Association