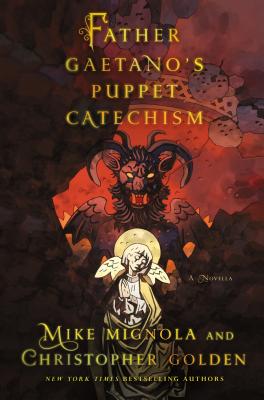 From the creator of "Hellboy, " "Father Gaetano's Puppet Catechism "by Mike Mignola and Christopher Golden is an illustrated novella that brings Twilight Zone originality to the written page

In the aftermath of a critical World War II battle, Father Gaetano is assigned as the sole priest at the Church of San Domenico in the small, seaside Sicilian village of Tringale. The previous pastor has died and there is a shortage of clergy at the moment, so until another can be spared, the young priest must say all of the masses himself.

Mass is not Father Gaetano's only responsibility, however. The war has created many orphans, and thus the San Domenico rectory has been converted into an orphanage which is also his domain. The children are a joy to him, but they have lost so much, and many have begun to question their faith and their God, and his attempts to teach them catechism are in vain . . . until he finds an old puppet theatre and an ornate box of puppets in the basement. Handcrafted by the building's former caretaker, now absent, the puppets seem the perfect tool to get the children to pay attention to their lessons. But after dark the puppets emerge from that ornate box, without their strings. While the children have been questioning their faith, the puppets believe Father Gaetano's Bible stories completely. But there is such a thing as too much faith. And the children's lives will never be the same again.

Praise for Joe Golem and the Drowning City:

"One of the most powerful 'neverwheres' of the modern fantastic imagination." —

“A story that grabs from the first page and doesn’t let go.”—Tad Williams

“Unique and inventive…. Recommended for fans of Hellboy, dystopian novels, and those who like a little horror with their action stories.” —Library Journal

MIKE MIGNOLA is best known as the award-winning creator/writer/artist of "Hellboy." He was also visual consultant to director Guillermo del Toro on both "Hellboy and Hellboy 2: The Golden Army "films. He also co-authored (with Christopher Golden) 2 novels "BALTIMORE, or, The Steadfast Tin Soldier" "and the Vampire "and" Joe Golem and the Drowning City." Mignola lives in southern California with his wife, daughter, and cat.
Loading...
or
Not Currently Available for Direct Purchase