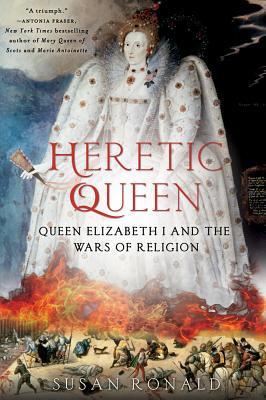 Queen Elizabeth I and the Wars of Religion

Elizabeth's 1558 coronation procession was met with an extravagant outpouring of love. Only twenty-five years old, the young queen saw herself as their Protestant savior, aiming to provide the nation with new hope, prosperity, and independence from the foreign influence that had plagued her sister Mary's reign. Given the scars of the Reformation, Elizabeth would need all of the powers of diplomacy and tact she could summon.

Extravagant, witty, and hot-tempered, Elizabeth was the ultimate tyrant. Yet at the outset, in religious matters, she was unfathomably tolerant for her day. "There is only one Christ, Jesus, one faith," Elizabeth once proclaimed. "All else is a dispute over trifles." "Heretic Queen "is the highly personal, untold story of how Queen Elizabeth I secured the future of England as a world power. Susan Ronald paints the queen as a complex character whose apparent indecision was really a political tool that she wielded with great aplomb.

Born and raised in the United States, SUSAN RONALD has lived in England for more than twenty-five years. She is the author of "The Pirate Queen, The Sancy Blood Diamond, "and "France: Crossroads Of Europe." Ronald owns a film production company and is a screenwriter and film producer.
or
Not Currently Available for Direct Purchase
Copyright © 2020 American Booksellers Association