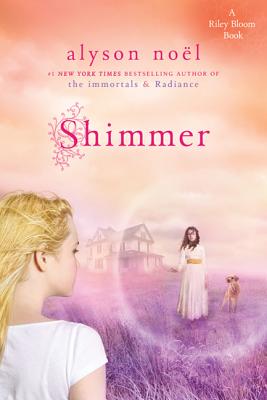 Having solved the matter of the Radiant Boy, Riley, Buttercup, and Bodhi are enjoying a well-deserved vacation. When Riley comes across a vicious black dog, against Bodhi's advice, she decides to cross him over. While following the dog, she runs into a young ghost named Rebecca. Despite Rebecca's sweet appearance, Riley soon learns she's not at all what she seems. As the daughter of a former plantation owner, she is furious about being murdered during a slave revolt in 1733. Mired in her own anger, Rebecca is lashing out by keeping the ghosts who died along with her trapped in their worst memories. Can Riley help Rebecca forgive and forget without losing herself to her own nightmarish memories? Find out in Shimmer, the second book in the Riley Bloom series from bestselling author Alyson Noël.

“Bestselling author Alyson Noël gives fans the second book in her fascinating series about Riley Bloom and her life after death. The character of Riley brings a lot of energy to the story, and her clumsy but heartfelt attempts to do what's right are endearing and contagious.” —KidsReads.com

“Understanding and enjoying this book does not hinge on having read Radiance (Square Fish, 2010), but readers will be quickly drawn to Riley and want to learn more about this spunky character and her previous experiences. The author's sharp contemporary wit in concert with her fascinating fantasy setting and important historical connections will draw readers through this enjoyable novel and have them begging for Riley's third adventure.” —School Library Journal

“Noël ably captures the cadence of tweenspeak in this lively, action-packed adventure.” —Booklist