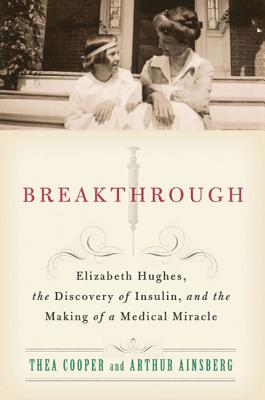 Elizabeth Hughes, the Discovery of Insulin, and the Making of a Medical Miracle

It is 1919 and Elizabeth Hughes, the eleven-year-old daughter of America's most-distinguished jurist and politician, Charles Evans Hughes, has been diagnosed with juvenile diabetes. It is essentially a death sentence. The only accepted form of treatment – starvation – whittles her down to forty-five pounds skin and bones. Miles away, Canadian researchers Frederick Banting and Charles Best manage to identify and purify insulin from animal pancreases – a miracle soon marred by scientific jealousy, intense business competition and fistfights. In a race against time and a ravaging disease, Elizabeth becomes one of the first diabetics to receive insulin injections – all while its discoverers and a little known pharmaceutical company struggle to make it available to the rest of the world.

Relive the heartwarming true story of the discovery of insulin as it's never been told before. Written with authentic detail and suspense, and featuring walk-ons by William Howard Taft, Woodrow Wilson, and Eli Lilly himself, among many others.


Praise For Breakthrough: Elizabeth Hughes, the Discovery of Insulin, and the Making of a Medical Miracle…

“The twentieth century witnessed many medical miracles, but perhaps none was so transformative as the discovery of insulin for the treatment for diabetes. Breakthrough is the fascinating tale of Nobel prize-winning research, of a young girl who should have died as a child but instead lived to see seven grandchildren, and of a drug that turned a death sentence into something more akin to a chronic nuisance. This book is an important read for anyone with diabetes. It is an enjoyable read for those who love mystery and human drama.” —Kenneth T. Jackson, Barzun Professor of History, Columbia University

Thea Cooper is an author, playwright, editor and teacher. She is the co-author of Breakthrough: Elizabeth Hughes, the Discovery of Insulin, and the Making of a Medical Miracle.

Arthur Ainsberg is an author and financial industry veteran whose successful battle with Hodgkin's disease sparked his interest in medical history.
Loading...
or
Not Currently Available for Direct Purchase