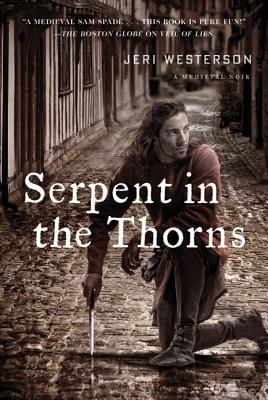 Serpent in the Thorns

Convicted of treason, Crispin Guest was stripped of his title, his land, his money and his friends. Now with only his considerable wits to sustain him, Guest works the mean streets of 14th century London, building a small reputation for his skill. In 1383, a simple-minded tavern girl comes to his door a body was found where she works and she's the only person who could have killed him. Except for the fact that the man was killed in place by a precisely aimed crossbow bolt. Making matters worse, the murdered man was one of three couriers from the French king, transporting a relic intended to smooth the troubled relations between France and England. Events quickly spin out of control and Guest now finds himself the prime suspect in the murder, one with terrible diplomatic implications. As the drumbeat of war between the two countries grow, Guest must unravel the con spiracy behind the murder to save not only his country, but himself as well.


Praise For Serpent in the Thorns…

"Distinctively entertaining."
--Kirkus Reviews
"There are gripping scenes of escape, vivid descriptions of everyday life, and a mystery that keeps you guessing until the end.... A rollicking good read."
--School Library Journal
"Westerson adds flavor to the tale by enhancing the relationship between Guest and his young helper."
--Library Journal

JERI WESTERSON is a journalist, author of Veil of Lies, and noted blogger on things mysterious and medieval. She lives with her family in Menifee, California.
Loading...
or
Not Currently Available for Direct Purchase