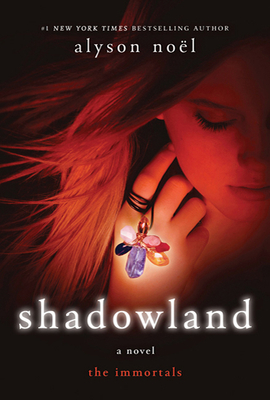 Experience the extraordinary #1 New York Times bestselling series from Alyson Noël that has taken the world by storm. Enter the realm of The Immortals…

Ever and Damen have gone through countless lives and fought off the world's darkest enemies so they could be together. But just when an everlasting future is finally within their reach, Damen is struck down by a curse—a dark spell separating him and Ever for eternity. Now sharing so much as a single touch could bring about Damen's death…and send him plummeting into the Shadowland, an eternal abyss for lost souls. Desperate to break the curse and save Damen, Ever immerses her herself in magick. And in her quest, she gets help from an unexpected source...a surfer named Jude.

Although she and Jude have only just met, he feels startlingly familiar. Despite her fierce loyalty to Damen, Ever is drawn to Jude, a green-eyed golden boy with magical talents and a mysterious past. She's always believed Damen to be her soulmate and one true love—and she still believes it to be true. But as Damen pulls away to save them from the darkness inhabiting his soul, Ever's connection with Jude grows stronger—and tests her love for Damen like never before…


Praise For Shadowland: The Immortals…

“I have never been more unexpectedly surprised by an author. Noel knows exactly how to keep me enthralled in her books...Shadowland is purely mesmerizing. A book with a little bit of everything in it- romance, suspense, friendship, and immortality-all meshed together to create a mind-blowing combination.” —The Book Blogger

“It is the mark of a daring writer to defy expectations and Alyson Noel does that to the power of ten in Blue Moon." I guarantee you will have no idea what's coming in the second book of the series while Alyson Noel surprises you with a big, fat twist and leaves you wanting more, more, more.” —The Book Chick

“Alyson Noël has many talents to share as a writer, and she proves it again and again with her amazing Immortals series. She writes with an intensity and a passion, her words weaving perfectly together to create an overwhelming experience for the senses and the heart.” —Teen Reads

“Blue Moon was incredible. If you thought Evermore was full of suspense and unknowns, just wait until you read Blue Moon. Noel surpassed all expectations...The plot was insane, and I mean that in a good way. Noel took this novel in a direction I was never expecting, resulting in an emotional roller coaster ride that I never wanted to end. It was so cleverly pieced, so intricately meshed, I never saw it coming. Fabulous.” —The Story Siren