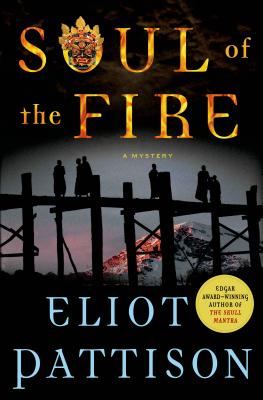 In Eliot Pattison's Soul of the Fire, When Shan Tao Yun and his old friend Lokesh are abruptly dragged away by Public Security, he is convinced that their secret, often illegal, support of struggling Tibetans has brought their final ruin. But his fear turns to confusion as he discovers he has been chosen to fill a vacancy on a special international commission investigating Tibetan suicides. Soon he finds that his predecessor was murdered, and when a monk sets himself on fire in front of the commissioners he realizes that the Commission is being used as a tool to whitewash Tibet's self-immolation protests as acts of crime and terrorism. Shan faces an impossible dilemma when the Public Security officer who runs the Commission, Major Ren, orders the imprisoned Lokesh beaten to coerce Shan into following Beijing's script for the Commission. He has no choice but to become part of the hated machine that is devouring Tibet, but when he discovers that the most recent immolation was actually another murder, he realizes the Commission itself is riddled with crime and intrigue.
Everywhere he turns, Shan finds new secrets that seem to lead to the last agonizing chapter of his life. Shan must make a final desperate effort to uncover the Commission's terrible secrets whose painful truth could change Shan's life - and possibly that of many Tibetans - forever.


Praise For Soul of the Fire: A Mystery (Inspector Shan Tao Yun #8)…

“Superlative...Pattison impressively combines a thrilling plot with a passionate denunciation of the Chinese oppression of the Tibetan people.” —Publishers Weekly (starred review)