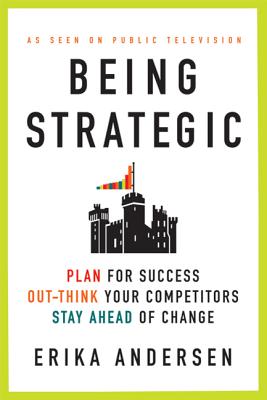 Plan for Success; Out-think Your Competitors; Stay Ahead of Change

How many times have you sat in a meeting and heard someone say, "We're not being very strategic" or "We need to approach this more strategically"? If your organization is like most, everyone in the meeting nods wisely, the meeting drones on, people endlessly debate how to approach the situation at hand, and no one is the wiser as to what "strategic" really means.

Next time, say this: "Being strategic means consistently making those core directional choices that will best move us toward our hoped-for future. Is this what we're doing?"

Everybody talks about strategy, but there is a big gap between discussing strategy and using a practically strategic approach to achieving the business, the career, or the life you most want.

In this book, Erika Andersen offers you a step-by-step model and skills for making being strategic a powerful habit of mind and action:

• First, get clear about the problem you're trying to solve.
• Then, figure out where you're starting from.
• Now, envision your "castle on the hill," the future you want to create.
• Identify the "trolls under the bridge," the obstacles in your path.
• Next, outline the path to the castle: your core strategies and the tactics for implementing them.
• Keep updating your strategic roadmap as you move toward your vision.

With this model and dozens of real-life examples, Being Strategic will help you approach business—and life—strategically.


Praise For Being Strategic: Plan for Success; Out-think Your Competitors; Stay Ahead of Change…

“[Erika Andersen is] to strategy what Suze Orman is to personal finance!” —Nancy Tellem, Senior Advisor to the CEO, CBS Corporation

“Unlike most experts in her field, Erika Andersen has an approach to being strategic that's sensible and accessible. With her, you feel capable of creating the business, career and life you want. She's to strategy what Suze Orman is to personal finance!” —Nancy Tellem, President, CBS Paramount Television Network Entertainment Group

“Over the past decade, in each of the companies I've led, I've relied on Erika Andersen to help me engage my senior team in getting clear about the future we want to create for our enterprise, and figuring out what it will take for us to get there. Her vision and strategy process helps us get our heads around complex issues in a way that's unusually simple: I'm always surprised, at the end of a session, how we've made our aspirations practical and built a clear path to achieving them.” —Doug Herzog, President, MTVN Entertainment Group

“My partners and I have turned to Erika Andersen each time our company has reached a new plateau of growth - and generally when we need her expert prodding, analysis, and follow-up to get us over the next organizational hump. When I described our most recent re-structuring plan to a friend - a seasoned and successful financial professional - he was certain we must have hired McKinsey & Co. to help us think things through. Wrong. It was Erika Andersen.” —Danny Meyer, restaurateur, President, Union Square Hospitality Group

“To most of us, the thought of articulating a long-term strategy that is both visionary and practical seems an overwhelming task. The approach used by Erika Anderson enables a team to effectively articulate ideas, reach consensus, and formulate a detailed course of action for achieving their vision.” —Kathy Dore, President, CanWest Media Broadcasting

“When I became President of Women in Cable Telecommunications in 2001, I realized the organization needed to re-invent itself. Since that time, we've used the Proteus strategic approach to create a clear, powerful vision of the organization we wanted, and then to continually move toward that vision. WICT is now growing and vital -- and Erika's work with us has been hugely helpful in making that our reality.” —Benita Fitzgerald Mosley, President WICT and Olympic Gold Medalist

Erika Andersen is the founder of Proteus International, an organizational development firm whose clients include celebrity restaurateur Danny Meyer, MTV Networks, Rockwell Automation, Comcast Corp., General Electric, Time Inc., and NBC Universal. Andersen has been featured in leading business publications including Forbes, The New York Times, the National Post and Investor's Business Daily. Her first book, Growing Great Employees: Turning Ordinary People into Extraordinary Performers was a finalist in both the 800CEOREAD Awards and the Axiom Awards for Best Business Book of 2007.
Loading...
or
Not Currently Available for Direct Purchase