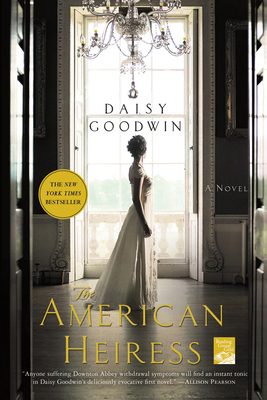 "Anyone suffering Downton Abbey withdrawal symptoms (who isn't?) will find an instant tonic in Daisy Goodwin's The American Heiress. The story of Cora Cash, an American heiress in the 1890s who bags an English duke, this is a deliciously evocative first novel that lingers in the mind." --Allison Pearson, New York Times bestselling author of I Don't Know How She Does It and I Think I Love You

Be careful what you wish for. Traveling abroad with her mother at the turn of the twentieth century to seek a titled husband, beautiful, vivacious Cora Cash, whose family mansion in Newport dwarfs the Vanderbilts', suddenly finds herself Duchess of Wareham, married to Ivo, the most eligible bachelor in England. Nothing is quite as it seems, however: Ivo is withdrawn and secretive, and the English social scene is full of traps and betrayals. Money, Cora soon learns, cannot buy everything, as she must decide what is truly worth the price in her life and her marriage.

Witty, moving, and brilliantly entertaining, Cora's story marks the debut of a glorious storyteller who brings a fresh new spirit to the world of Edith Wharton and Henry James.

"For daughters of the new American billionaires of the 19th century, it was the ultimate deal: marriage to a cash-strapped British Aristocrat in return for a title and social status. But money didn't always buy them happiness." --Daisy Goodwin in The Daily Mail


Praise For The American Heiress: A Novel…

“A propulsive story of love, manners, culture clash, and store-bought class from a time long past that proves altogether fresh.” —Publishers Weekly

“[An] exceptionally thoughtful and stunning historical novel that will leave you reeling and astonished...and give you the urge to re-read it the instant the last page is turned.” —BookReporter.com

“I was seduced by this book, rather as Cora was seduced by her duke: with great skill and confidence. Intriguing, atmospheric, and extremely stylish.” —Penny Vincenzi, author of The Best of Times

“A wonderful, guilty pleasure of a read. The detailing is beautiful...and the relief of reading a novel that puts enjoyment first so rare and gratifying that I am ready for a sequel.” —Amanda Foreman, New York Times bestselling author of Georgiana, Duchess of Devonshire and A World on Fire

What is your initial impression of Cora Cash?

How does she develop as a person in the course

In America, Cora is clearly at the top of society,

while Bertha is very near the bottom. In what ways

do their circumstances change when they move

What is your opinion of Teddy and the Duke?

What do you think about Cora’s decision at the

end of the book? Would you have made the same

choice? (The author has said she was of two minds

up until the last chapter.)

What are the differences between the Old World

and the New in the novel? Do both worlds seem

remote in the twenty-first century, or do you see

about the past? Take a moment to discuss your

experiences as a reader of historical fiction, in

general, and of The American Heiress in particular.

When she was chair of the Orange Prize for

Fiction in 2010, Daisy Goodwin wrote a

grimness” of so many of the novels and pointing

and shade”—not only misery but joy and humor.

What do you think about Daisy’s argument that

“it is time for publishers to stop treating literary

fiction as the novelistic equivalent of cod-liver oil:

if it’s nasty it must be good for you”?

of Henry James. If you have read any of these

earlier novelists, what parallels and differences

do you see in Daisy’s work?