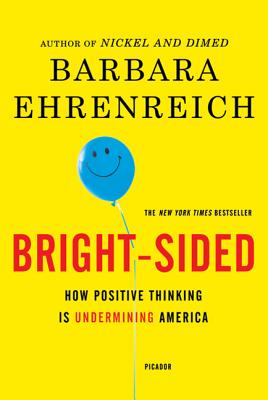 How Positive Thinking Is Undermining America

Americans are a "positive" people -- cheerful, optimistic, and upbeat: This is our reputation as well as our self-image. But more than a temperament, being positive is the key to getting success and prosperity. Or so we are told.

In this utterly original debunking, Barbara Ehrenreich confronts the false promises of positive thinking and shows its reach into every corner of American life, from Evangelical megachurches to the medical establishment, and, worst of all, to the business community, where the refusal to consider negative outcomes--like mortgage defaults--contributed directly to the current economic disaster. With the myth-busting powers for which she is acclaimed, Ehrenreich exposes the downside of positive thinking: personal self-blame and national denial. This is Ehrenreich at her provocative best--poking holes in conventional wisdom and faux science and ending with a call for existential clarity and courage.


Praise For Bright-sided: How Positive Thinking Is Undermining America…

Barbara Ehrenreich is the bestselling author of over a dozen books, including Nickel and Dimed, Bait and Switch, Bright-sided, This Land Is Their Land, Dancing In The Streets, and Blood Rites. A frequent contributor to Harper's, The Nation, The New York Times and Time magazine, she lives in Virginia.
Loading...
or support indie stores by buying on
(This book is on backorder)