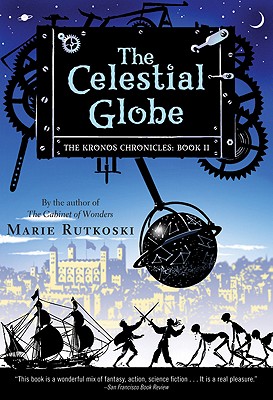 After stealing her father’s eyes back from Prince Rodolfo, Petra Kronos lives in constant danger. She and her tin spider, Astrophil, end up hiding out in London, where she learns more about her magical abilities. London has its charms (like Petra’s attractive fencing master), but Petra needs to get back to Bohemia and her father. Meanwhile, Prince Rodolfo is trying to locate a powerful object called the Celestial Globe. Petra’s friends, Tomik and Neel, are searching for her and traveling with a band of Gypsies searching for the globe. The race is on to see who will find the globe first, and who will make it out of this deadly chase alive.

“A fun and creative voyage with unexpected twists and energetic turns . . . . Rutkoski's creative imagery and beautifully descriptive thoughts create a world that you could happily get lost inside.” –Deseret News


“Rutkoski builds on what worked in the first novel and heightens the stakes. . . . Strong characters and fast-paced plotting let this compelling installment stand independently, but the ending will leave readers eager for the next.” -Starred, Publishers Weekly


“This book is a wonderful mix of fantasy, action, science fiction, and even a bit of romance. It is a real pleasure to find a book so smooth in its transitions. Though it is incredibly imaginative, the storyline is easy to follow.” –San Francisco Book Review

“The fantastical journey of Tomik and Neel, and Petra’s struggles with her captor, her education, and her love interest will engage fans of the first book and bring new readers to the series. An author’s note (cunningly penned by Astrophil, Petra’s clockwork spider) explains which characters and events are rooted in historical fact.” –School Library Journal


“[Readers will] be engrossed in a tale that is part mystery and part fantasy, with a reveal at the end so grotesque they’ll be clamoring for the next book’s release date. A true original.” —Kirkus Reviews

Marie Rutkoski is the author of "The Kronos Chronicles." "The Cabinet of Wonders," her debut novel, was named an Indie Next Kids' List Great Read and a Bank Street Best Children's Book of the Year, among other honors. Rutkoski grew up in Bolingbrook, Illinois (a suburb of Chicago), as the oldest of four children. She attended the University of Iowa, where she took Writers' Workshop classes and studied with Pulitzer Prize-winner James Alan McPherson. After graduating, she lived in Moscow and Prague. Upon receiving her Ph.D. from Harvard University, she held dual appointments as a lecturer there in both English and American Literature and Language, and History and Literature. Rutkoski is currently a professor at Brooklyn College, where she teaches Renaissance Drama, children's literature and creative writing. She lives in New York City.
Loading...
or
Not Currently Available for Direct Purchase