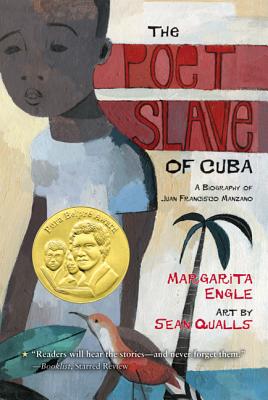 A lyrical biography of a Cuban slave who escaped to become a celebrated poet, from Newbury Honor author Margarita Engle.

“An absolutely lovely book . . . that should be read by young and old, black and white, Anglo and Latino.” —School Library Journal, Starred Review

“The moving poetry and finely crafted story will draw readers in and leave them in tears and in awe.” —The Bulletin of the Center for Children's Books, Starred Review

“A rare and stunning account . . . a tour-de-force.” —Juan Felipe Herrera, winner of the Pura Belpré Honor for Laughing out Loud, I Fly: Poems in English and Spanish

“I not only learned about an exceptional life--I felt it. Soul-stirring and direct.” —Nancy Osa, winner of the Pura Belpré Honor for Cuba 15

“Only a poet with Engle's delicate sensitivity could have presented the complexity of Manzano's life and the depth of his soul in such a brief, accessible, and enthralling book.” —Alma Flor Ada, winner of the Pura Belpré Medal for Under the Royal Palms

“Every once in a while a book comes along that is so heart-achingly beautiful, so pure, you want to tear down the doors and make the world take notice. This is one of those rare works.” —Cindy Wathen, co-author of Remembering Cesar: The Legacy of César Chávez

“This beautiful, unique biography reads and sounds like a symphony. Lyrical, informative, and inspiring.” —Teresa Dovalpage, author of A Girl Like Che Guevara

“Through this impassioned story we plunge into the inhuman depths of slavery and surge up with the Poet Slave to triumphant freedom.” —Anilú Bernardo, author of Jumping Off to Freedom

Sean Qualls illustrated the widely acclaimed biographies The Poet Slave of Cuba and Dizzy. He lives with his wife and son in Brooklyn, New York.
Loading...
or support indie stores by buying on