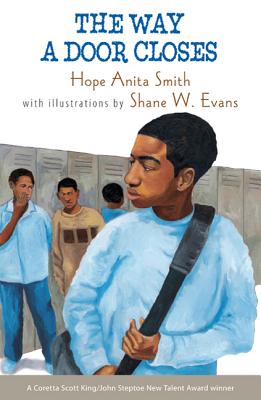 In this beautifully written and powerfully moving novel in poems, Hope Anita Smith tells the story of a young man's struggle to accept a father who has walked out on his family.

My best friend, Preacher, is being just that. His sermon today is on fathers and I am his congregation.
"Dads are light. They have no roots.
One strong wind, and they're gone.
Out of here. History."

With a click, a bang, a whisper—or no noise at all. There are so many ways that a door can close, but it's not just the closing; it's the knowing. And thirteen-year-old CJ knows too much—about losing his father, about his family's pain, and especially about what it means to hold things together when times are the toughest. Here, in CJ's words, is a portrait of hurt and healing, and finding the strength to open the door again.


Praise For The Way a Door Closes…

“Smith and Evans have created a wonderful way to introduce young readers to the world of poetry.” —Black Issues Book Review

“Hope Smith's voice is vivid and evocative, I'm glad her words are in the world.” —Jacqueline Woodson

“Good poetry touches the heart, and this offering does just that.” —School Library Journal, Starred Review