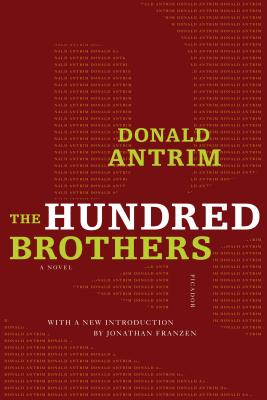 With a New Introduction by Jonathan Franzen

There's Rob, Bob, Tom, Paul, Ralph, and Noah; Nick, Dennis, Bertram, Russell, and Virgil. The doctor, the documentary filmmaker, and the sculptor in burning steal; the eldest, the youngest, and the celebrated "perfect" brother, Benedict. In Donald Antrim's mordantly funny novel The Hundred Brothers, our narrator and his colossal fraternity of ninety-eight brothers (one couldn't make it) have assembled in the crumbling library of their family's estate for a little sinister fun. Executed with the invention and intelligence of Barthelme and Pynchon, Antrim's taxonomy of male specimens is in equal proportions disturbing and absurdly hilarious.


Praise For The Hundred Brothers: A Novel…

“A fiercely intelligent writer . . . This is a bravura nightmare.” —The New York Times

“The author's surreal vision is both imaginative and wholly his own . . . A striking literary discovery.” —The Boston Globe

“A fantasy that capers between atavistic ritual and inspired slapstick.” —Time