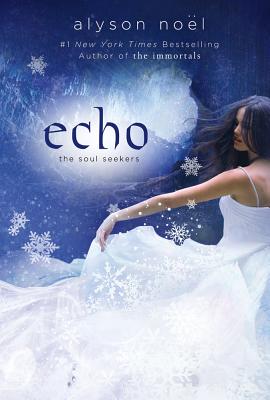 "A rush of romance will sweep you away in this hauntingly mystical read. I'm already as addicted to Daire and Dace as I was to Ever and Damen " "Justine" magazine

"She inherited a magical destiny and a mission to stop a powerful family of dark sorcerers. She never expected to fall in love with one of them."

There's still so much Daire Santos has to learn about being the last Soul Seeker .and about herself. As her magical training becomes more intense, so does her relationship with Dace. But when she learns that his connection to the evil Richter family goes far deeper than she ever imagined, she begins to question if love really can conquer all.

Dace is painfully aware that he wouldn't exist if it wasn't for the Richters' dark magic and now his brother Cade is determined to use his love for Daire against him. Dace is willing to sacrifice anything to protect the girl he loves including his own life. But will Daire allow it? And what if defeating Cade costs not only his life, but his soul too?

Praise for Echo and the Soul Seekers series by Alyson Noel

"Daire and her boyfriend Dace are back to restore the balance of good and evil after saving her grandmother and her soul. Dace is deliciously yummy, and if I say so myself, so is his evil brother Cade. It's a bit more fast paced than Fated was, and it's setting up the series to have longevity. If only it wasn't so long again until the next installment!"—Night Owl Reviews (4.5 Stars- Top Pick!)

“Noël uses her New Mexico setting to weave in Native American mythology such as spirit animals and skinwalking. An intriguing story.” – Kirkus Reviews

“Daire and Dace's chemistry is intense and sizzling. Whenever they are by each other, sparks fly.  And the other characters add flavor to this highly addictive read.  I couldn’t put this book down!” –Young Adult Books Central

"Noël does a terrific job of slowly unspooling secrets and motivations with writing that is both charismatic and spunky." –LA Times "A rush of romance will sweep you away in this hauntingly mystical read. I'm already as addicted to Daire and Dace as I was to Ever and Damen. Next book please!" –Janet, teen reader from Kentucky for Justine magazine "An adventurous page-turner. Dreams and reality bleed into each other in this dangerous and edgy romance. Another home run series for Alyson Noël!" –Anna, teen reader from NY for Justine magazine "Emotional, fast-paced, romantic. I love Alyson Noël’s lushly descriptive writing –I could hear the beating of the crow’s wings, feel the blue-eyed boy’s embrace and smell Paloma’s coffee in this new Soul Seekers series." –Catherine, teen reader from Florida for Justine magazine "With fantastic characters and an amazing plot, Fated will suck you in and leave you breathless. Noël is a master with words…with passion and thrills around each corner, this book is a must read." – Romantic Times (Top Pick!) "Atmospheric and enjoyable...Noël's many fans will be eager to find out what happens next." –Publishers Weekly "Readers will feel the pull of Daire's quest just as forcefully as Daire herself does, and will count the days until the release of Echo." –Shelf Awareness, Maximum Shelf "A fast and enjoyable read...with some very unique plot twists and balance among the romance, conflict and family relationships." --Deseret News "Two boys, one light and one dark, factor heavily into the intriguing, twisting story line, which is sure to draw Noël’s numerous fans." –Booklist "Another captivating series from Alyson Noël. Fated did an excellent job setting up everything for the next books in the series. …I’m really looking forward to seeing where this series goes!" –The Story Siren "Fated reads very well and the descriptions set the scene perfectly. Noel takes the time to set the story up right so it never feels rushed or that any details were missing. …I’m glad there’s not too long to wait for the sequel – Echo is due out in November of this year."—The Reading Date "If you're looking for a new series to get stuck into "The Soul Seekers" is out of this world." –Dark Readers  "I found myself unable to put this book down, completely captivated by the narration and the beautifully crafted world. It was a refreshing YA fantasy with new elements I’ve never before." –Love, Literature, Art and Reason "A superb thriller. The key to this absorbing tale is the heroine who makes the Noël mythos seem genuine as she enters the underworld while wondering who she can trust. Filled with twists, this is a winning opening act." – Alternative Worlds "This book has it all—magick, spookiness, cute boys, a little romance, danger, fun and light-hearted moments, some mystery, and there's even good/evil twins (cute ones, too!) What more can you ask for? I am very intrigued by this new world that Alyson has created, and I cannot wait to read more about Daire and her friends in the future." –Once Upon A Twilight "Noël has surpassed all of my exceptions with a new world filled with magick, trust, and love. . . . It just mesmerizes me how [she] can create a world filled with fast-pacing, heart-breaking plots along with awesome characters and such a magical world."—Cover Analysis "I loved this book. All the characters were beautifully developed including some of the minor characters. . . I for one had high expectations of this book because of Evermore and Fated defiantly met those standards." —Flamingnet "The world-building in Fated is fantastic. …The plot is amazing and the rich Native American history along with the supernatural elements of the book, just made it even better...Fated is a story of pure magic—breathtaking and wonderful, all at once."  —Kindle & Me "Fated was absolutely original in its own way! From the vivid descriptions to the spiritual world the author, Alyson Noël, has cleverly created, I was so intrigued and stunned by this book that I can't wait to see where Noël takes this series to because she sure as hell has a winner right here!" —Tales of the Inner Book Fanatic

"This novel is something different than anything I've encountered. Fated has a rich mythology, full of spirit animals, spirit journeys, fate, soul-seeking, and of course, good and evil." —Thirteen Days Later

Alyson Noel is the #1 "New York Times" bestselling, award-winning author of "Faking 19," "Art Geeks and Prom Queens," "Laguna Cove," "Fly Me to the Moon," "Kiss & Blog," "Saving Zoe," "Cruel Summer," and the Immortals series including "Evermore," "Blue Moon," "Shadowland," "Dark Flame," and "Night Star," as well as the Immortals spin-off series beginning with "Radiance." With over 2 million copies in print in the US alone, her books have been published in 35 countries and have won awards including the National Reader's Choice Award, NYLA Book of Winter Award, NYPL Stuff for the Teenage, TeenReads Best Books of 2007, and Reviewer's Choice 2007 Top Ten, and have been chosen for the CBS Early Show's "Give the Gift of Reading" segment, and selected for "Seventeen Magazine"'s "Hot List" and Beach Book Club Pick. She lives in Laguna Beach, California."
Loading...
or
Not Currently Available for Direct Purchase