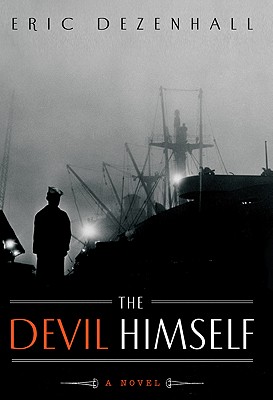 The Devil Himself (Hardcover)

"I'll talk to anybody, a priest, a bank manager, a gangster, the devil himself, if I can get the information I need. This is a war." -- Lt. Commander Charles Radcliffe Haffenden, Naval Intelligence Unit, B-3
In late 1982, a spike in terrorism has the Reagan Administration considering covert action to neutralize the menace before it reaches the United States. There are big risks to waging a secret war against America's enemies---but there is one little-known precedent.
Forty years earlier, German U-boats had been prowling the Atlantic, sinking hundreds of U.S. ships along the east coast, including the largest cruise ship in the world, "Normandie," destroyed at a Manhattan pier after Pearl Harbor. Nazi agents even landed on Long Island with explosives and maps of railways, bridges, and defense plants. Desperate to secure the coast, the Navy turned to Meyer Lansky, the Jewish Mob boss. A newly naturalized American whose fellow Eastern European Jews were being annihilated by Hitler, Lansky headed an unlikely fellowship of mobsters Lucky Luciano, Bugsy Siegel, Frank Costello, and naval intelligence officers.
Young Reagan White House aide Jonah Eastman, grandson of Atlantic City gangster Mickey Price, is approached by the president's top advisor with an assignment: Discreetly interview his grandfather's old friend Lansky about his wartime activities. There just might be something to learn from that secret operation.
The notoriously tight-lipped gangster, dying of cancer, is finally ready to talk. Jonah gets a riveting---and darkly comic---history lesson. The Mob caught Nazi agents, planted propaganda with the help of columnist Walter Winchell, and found Mafia spies to plot the invasion of Sicily, where General Patton was poised to strike at the soft underbelly of the Axis. Lansky's men stopped at nothing to sabotage Hitler's push toward American shores.
Based on real events, "The Devil Himself "is a high-energy novel of military espionage and Mafia justice.

ERIC DEZENHALL cofounded the communications firm Dezenhall Resources, Ltd., and serves as its CEO. His most recent book of nonfiction, "Damage Control: Why Everything You Know About Crisis Management Is Wrong," pioneered techniques for understanding and defusing crises. The author of five previous novels, he lives in the Washington, D.C., area.

Praise For The Devil Himself…

"A darkly comic tale about a chaotic period in American history."--Las Vegas Review-Journal "A fascinating account, based on fact, of the significant role Lansky, Lucky Luciano, and other mobsters played in ridding New York harbor of spies and preparing the soil for the invasion of Sicily. ... Entertaining home front espionage"--Booklist

"With 'the fate of civilization rested upon a handful of weary sailors and patriotic crooks,' Dezenhall intrigues with well-imagined, little-known history."--Kirkus Reviews

"In the fictional thriller, The Devil Himself, author Eric Dezenhall explores how keeping friends close and enemies closer turned out well for the U.S. Navy during FDR’s reign.  In the heat of foreign terror, officials from the Reagan administration look back to the escapades of mobster Meyer Lansky, who, along with his posse, helped the Navy keep Nazis from invading the country."--DC Magazine

"Cloaking fact inside fiction can produce a fascinating product, and that is precisely what Washington, D.C., writer Eric Dezenhall has done in The Devil Himself."--The Washington Times

“The author has created a fascinating tale, a mixture of fact and creative fiction about military covert actions, espionage, and how the Mob, while breaking many of its laws, remains patriotic when its country is under threat. This is a brilliantly entertaining novel.”--Historical Novels Review

“Like the literary masters Len Deighton and Norman Spinrad, in The Devil Himself Washington insider Eric Dezenhall spins a whimsical ‘what if’ tale with an alternative perspective on World War II and even sends up flares into the Reagan era.”--James Grady, author of Six Days of the Condor

"From an historical perspective, the book portrays yet another facet of a war and an era brimming with so many compelling and poignant personal stories."--OpenMarket.org

"A powerful story with fascinating characteriziations…captivating narration and dialogue."--Hadassah Magazine

Past Praise for Eric Dezenhall:

“[Dezenhall’s] superb eye and ear at times call to mind such masters of the journalistic novel as Tom Wolfe.” --Time


“[Dezenhall] keeps getting better with every novel.” --Booklist

"Finally gives the Mafia what they need---a pollster to improve their image!" --Janet Evanovich