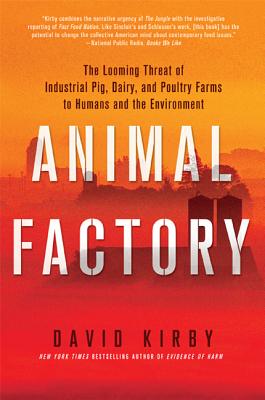 The Looming Threat of Industrial Pig, Dairy, and Poultry Farms to Humans and the Environment

“Centering on three different tales of large-scale factory farming, David Kirby takes the industry to task for its destruction of the environment, its deleterious effect on the family farm and rural America, and its lies, which have led to government inaction. Kirby's descriptions of how the animals are treated is chilling, and I can guarantee that you'll never eat pork with a clean conscience again.”
— Matthew Lage, Iowa Book L.L.C., Iowa City, IA
View the List

Recent public health crises raise urgent questions about how our animal-derived food is raised and brought to market. In Animal Factory, bestselling investigative journalist David Kirby exposes the powerful business and political interests behind large-scale factory farms, and tracks the far-reaching fallout that contaminates our air, land, and water supply—and our food itself.

In this thoroughly researched book, Kirby follows three people from small towns across America whose lives are utterly changed by immense neighboring animal farms. These farms confine thousands of pigs, dairy cattle, and poultry in small spaces, often under horrifying conditions, and generate enormous volumes of biological waste as well as other toxins. Weaving science, politics, big business, and everyday life, Kirby accompanies these citizens-turned-activists as they fight to preserve their homes and communities.

Animal Factory is an important book about our American food system gone terribly wrong—and the people who are fighting to restore sustainable farming practices and safe natural resources.


Praise For Animal Factory: The Looming Threat of Industrial Pig, Dairy, and Poultry Farms to Humans and the Environment…

“Kirby combines the narrative urgency of The Jungle with the investigative reporting of Fast Food Nation. Like Sinclair's and Schlosser's work, it has the potential to change the collective American mind about contemporary food issues.” —National Public Radio, Books We Like

“Thanks to Kirby's extraordinary journalism, we have the most relatable, irrefutable, and unforgettable testimony yet to the hazards of industrial animal farming.” —Booklist

“The writing is brilliant, the people profiled are inspirational in their activism, and the topic is one that so many people remain blissfully ignorant of. Everyone would benefit from reading this book.” —San Francisco Book Review