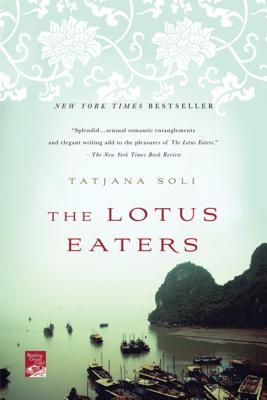 In the final days of a falling Saigon, The Lotus Eaters unfolds the story of three remarkable photographers brought together under the impossible umbrella of war: Helen Adams, a once-naïve ingénue whose ambition conflicts with her desire over the course of the fighting; Linh, the mysterious Vietnamese man who loves her, but is torn between conflicting loyalties to his homeland and his heart; and Sam Darrow, a man addicted to the narcotic of violence, to his intoxicating affair with Helen and to the ever-increasing danger of his job. All three become transformed by the conflict they have risked everything to record.

In this much-heralded debut, Tatjana Soli creates a searing portrait of three souls trapped by their impossible passions, contrasting the wrenching horror of combat and the treachery of obsession with the redemptive power of love.


Praise For The Lotus Eaters: A Novel…

“Devastatingly awesome…It's one of those books that I didn't want to put down -- I resented everything else that I needed to do in my life, because I didn't want to stop reading it.” —Nancy Pearl, NPR

“35 years after the fall of Saigon, Soli's entrancing debut brings you close enough to feel a part of it.” —People

“A haunting world of war, betrayal, courage, obsession, and love.” —Tim O'Brien, author of The Things They Carried

“You must read The Lotus Eaters, Tatjana Soli's beautiful and harrowing new novel. Its characters are unforgettable.” —Richard Russo, author of That Old Cape Magic

Tatjana Soli is the bestselling author of The Lotus Eaters, The Forgetting Tree, and The Last Good Paradise. Her work has been awarded the UK’s James Tait Black Prize and been a finalist for the Los Angeles Times Book Award. Her books have also been twice listed as a New York Times Notable Book. She lives on the Monterey Peninsula of California.
Loading...
or support indie stores by buying on