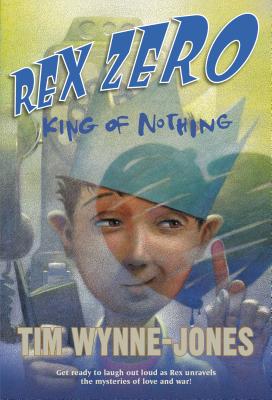 Rex Zero, King of Nothing

In sixth grade now, the wildly imaginative Rex Zero and his friends hatch a plan to replace Miss Garr, the substitute teacher from hell, and Rex takes on the persona of none other than "Dr. Love." Of course, events spin hilariously out of control. Miss Garr's cruel behavior is a mystery to Rex. But then, Rex's world is full of mysteries! There's the beautiful woman in white. Why does she have a black eye? There's the little black book filled with names. Who could it belong to? And why has Rex's father hidden a letter that begins: "Mein Liebchen"? Could all these things have something to do with the mystery of love? Underneath all of this is the age-old question of how to stand up and be a man. For if, as Rex's dad says, "a man's got to do what a man's got to do," how does Rex know what to do and when to do it?


Praise For Rex Zero, King of Nothing…

“* That smart and funny sixth grader introduced in Rex Zero and the End of the World is back. . . . While it is not necessary to have read the first book to enjoy this one, children will no doubt want to read it after and will look forward to more adventures.” —School Library Journal, starred review

“* Wynne-Jones brilliantly plays Rex's comfortable childhood world against the adult one Rex is just beginning to discern; the elegantly simple child-logic he applies to the latter yields both catastrophic and heroic results. . . . Well worth the ride.” —The Horn Book, starred review

“* Set in Ottawa in 1962, the story offers well-crafted, eccentric characters, laugh-out-loud humor, and a generous dose of 1960s culture. . . . Fans and preteens contemplating that long bridge to adulthood will be charmed.” —Booklist, starred review

“These seemingly uncorrupted characters are well aware of darkness. None of it touches their heroic childlike determination.” —Kirkus Reviews

“There are some laugh out loud moments. Descriptions are often memorable or lyrical as when Mother says things that happened during the war are ‘like stones on your father's heart.' Thoroughly enjoyable tale of Ottawa in the sixties and some neat kids.” —Sue Carita, The Toadstool Bookshop

“Once again, Wynne-Jones handily balances the humorous quirkiness of his hero with truly troublesome undercurrents of adult concerns that disturb his peace.” —The Bulletin for the Center of Children's Books

Writing a bio in the first person always makes me think of those boring people who back you into a corner at a party and tell you about themselves. The worst part is that they invariably situate themselves between you and the chips. I like chips. I like food. I love cooking. And crossword puzzles and cross-country skiing, although I make a point of not trying to do these activities at the same time.

I started writing when I was in my twenties. Never dreamed of becoming an author. Oh, I loved reading, but I had known since I was eleven that I was going to be a world-famous architect when I grew up, so I never took my writing very seriously. Besides, I failed high school English. But the university where I was training to become a world-famous architect thought it might not be such a good idea for me to design buildings into which real people might actually stray by mistake. So I turned to making art, which led to an M.F.A., which is when I realized that if I wasn’t careful, I was going to end up being offered a teaching job! So I wrote a novel very quickly.

I’ve won lots of awards. Oh, here -- can I get you the chips? You just munch away and I’ll tell you all about my honors: a couple of Governor General’s Literary Awards in Canada; three Canadian Library Association Prizes; the Arthur Ellis Award -- that’s from the Crime Writers of Canada; the Edgar Award for Young Adult Mystery from the Mystery Writers of America; the Boston Globe-Horn Book Award; and I’ve twice been short-listed for the Guardian Children’s Fiction Prize in the U.K. . . . Are you feeling woozy yet?

I’ve written three adult novels, but I got over that. I’ve also written a dozen picture books, three collections of short stories, and five novels for older readers, including A Thief in the House of Memory. The last novel before that was The Boy in the Burning House. Notice the house thing? You see? I’m still obsessed with architecture. The next title almost had a house in it, but I changed it to Rex Zero and the End of the World. It’s pretty funny, I think, considering it’s about the end of the world. I’ve already written the sequel, Rex Zero, King of Nothing.

Oh, don’t go. Please! I haven’t told you about my three very talented grownup kids and my wonderful wife and the cats and the seventy-six acres of land just outside of Perth, Ontario. I’ve got lots of pictures. Some other time? Okay.

Tim Wynne-Jones lives near Perth, Ontario, with his wife, Amanda, in a house he designed himself.