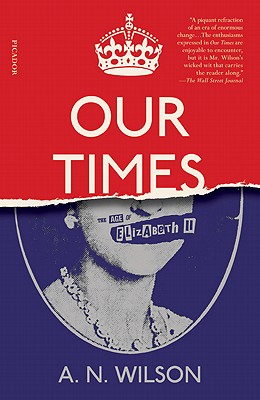 The Age of Elizabeth II

When Queen Elizabeth II was crowned in 1953, many proclaimed the start of a new Elizabethan Age. Few had any inkling, however, of the stupendous changes that would occur over the next fifty years, both in Britain and around the world. In Our Times, A. N. Wilson takes the reader on an exhilarating journey through postwar Britain. With his acute eye not just for the broad social and cultural sweep but also for the telling detail, he brilliantly distills half a century of unprecedented social and political change. With Our Times, Wilson triumphantly concludes the acclaimed trilogy that opened with The Victorians and was followed by After the Victorians. Our Times makes compelling reading for anyone interested in the forces that have shaped our world.


Praise For Our Times: The Age of Elizabeth II…

“The author’s often unconventional and funny takes on even the most familiar of subjects keep the pages turning.” —Stephen Lowman, The Washington Post

“[An] idiosyncratic history of modern Britain . . . In The Victorians and After the Victorians, Mr. Wilson showed an uncanny capacity for getting at the heart of past ages. In Our Times, the trilogy’s concluding volume . . .The author once again gives us a multifaceted portrait of an era. Like its predecessors, the book is enlivened by Mr. Wilson’s gift for anecdote [and] character analysis . . . His discussion of the time is infused with a directly personal memory of people, places and events. The result is a piquant refraction of an era of enormous change through a prism that is highly individualistic, even at times eccentric, but in the end deeply rooted and fundamentally true . . . The enthusiasms expressed in Our Times are enjoyable to encounter, but it is Mr. Wilson’s wicked wit that carries the reader along.” —Martin Rubin, The Wall Street Journal

“Like Gibbon, Wilson uses a style of storytelling that’s deeply opinionated, assertive, and enlivened by a keen sense of theater. This is history told not with cool textbook neutrality, but in the voice of a wry uncle holding forth from his armchair.” —The Christian Science Monitor

“[Our Times] shows the author as a deeply committed watcher of our time, offering even American readers a great deal to ruminate over. By turns sardonic, rueful, engaging and cantankerous.” —Kirkus Reviews


“Wilson produces a history that even those not familiar with Great Britain will find fascinating.” —Library Journal


“A. N. Wilson’s Our Times is a scholarly, dark, and at times mordantly funny view of Britain’s recent history.” —Michael D. Langan, The Buffalo News

“The caustic humor is persuasive, articulate, funny, and provocative. Our Times is written for the Brits, but Americans will appreciate Wilson’s passionate voice and his nostalgia for the West’s lost exuberance and pride.” —Providence Journal-Bulletin

A.N. Wilson is an award-winning biographer and a celebrated novelist. He lives in North London.
Loading...
or
Not Currently Available for Direct Purchase