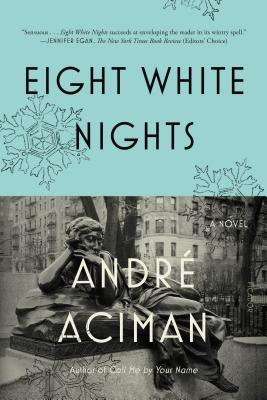 A young man goes to a Christmas party in upper Manhattan where a woman introduces herself with three simple words: "I am Clara." Over the following seven days, they meet every evening at the cinema. Overwhelmed yet cautious, he treads softly. The tension between them builds gradually—marked by ambivalence, hope, and distrust—culminating in a final scene on New Year's Eve charged with magic and the passion. André Aciman yet again explores human emotion with uncompromising accuracy in this piercing new novel. Eight White Nights is a brilliant performance from a master prose stylist.

“A bravura re-creation of all the feints and counterfeints, yearnings and frustrations, of modern courtship. It possesses the psychological acuity and intensity one associates not just with Proust but also with Dostoyevsky.” —Michael Dirda, The New York Review of Books

“Psychologically charged, deeply Dostoyevskian . . . original to the core. Then again, Aciman has never failed to be original. Nor is he a stranger to questions of love. ” —Marie Arana, The Washington Post

“Aciman brilliantly continues his examination into the minefield of longing and attraction. . . . For anyone who's ever smarted from the sharp dreamlike unreality of those obsessive early stages of young love, it's a blistering quick trip down the rabbit hole.” —Karen Campbell, The Boston Globe