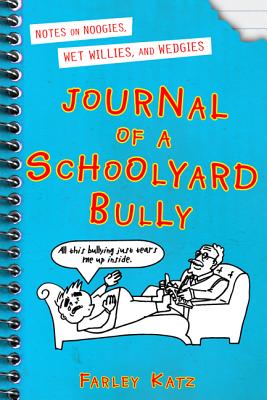 Journal of a Schoolyard Bully

In the tradition of the mega successful DIARY OF A WIMPY KID and DORK DIARIES comes Niko Taylor, a school bully who must keep a journal to right all the wrongs he has done, but Niko, being a habitual trouble-maker, has other ideas.

Niko Kaylor, the terror of his middle school, doles out wedgies and collects money he doesn't need. When he is forced to begin keeping a journal of his activities to curb his bullying ways, he secretly turns his diary into a how-to guide for bullies. Now, against the wishes of his peers, Niko plans to conquer his middle school and teach everyone a lesson in bullying, including his teachers.


Praise For Journal of a Schoolyard Bully: Notes on Noogies, Wet Willies, and Wedgies…

"The book has many funny moments… Katz has an inventive mind along the lines of Roz Chast’s.” – The New York Times Book Review

At 26, Farley Katz is the youngest staff cartoonist for The New Yorker, where he's published over fifty cartoons. Last year he wrote and edited the New Yorker's comedy blog, The Cartoon Lounge. He's written jokes and drawn cartoons for Mad Magazine, Saturday Night Live, and The Harvard Lampoon, where he was an editor in college. After graduating, he moved to Los Angeles where he developed a comedy pilot for Endemol, and wrote and directed for Budweiser's Bud T.V. His work has appeared on Eater.com and in Narrative magazine. He lives in New York City where he writes and draws the webcomic Kids Are Dumb (kidsaredumb.com).
Loading...
or
Not Currently Available for Direct Purchase