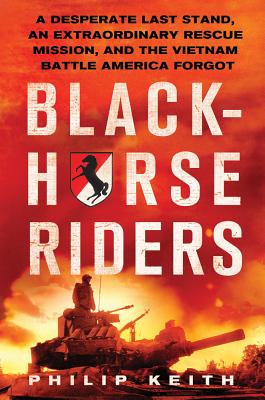 Winner of the 2012 USA Best Book Award for Military History

"Philip Keith's" Blackhorse Riders "is the incredible true story of a brave military unit in Vietnam that risked everything to rescue an outnumbered troop under heavy fire and the thirty-nine-year odyssey to recognize their bravery."

Deep in the jungles of Vietnam, Alpha Troop, 1st Squadron, 11th Armored Cavalry, the famed Blackhorse Regiment, was a specialized cavalry outfit equipped with tanks and armored assault vehicles. On the morning of March 26, 1970, they began hearing radio calls from an infantry unit four kilometers away that had stumbled into a hidden North Vietnamese Army stronghold. Outnumbered at least six to one, the ninety-man American company was quickly surrounded, pinned down, and fighting for its existence. Helicopters could not penetrate the dense jungle, and artillery and air support could not be targeted effectively. The company was fated to be worn down and eventually all killed or captured.

Overhearing the calls for help on his radio, Captain John Poindexter, Alpha Troop's twenty-five-year-old commander, realized that his outfit was the only hope for the trapped company. It just might be possible that they could "bust" enough jungle by nightfall to reach them. Not making the attempt was deemed unacceptable, so he ordered his men to "saddle up." With the courage and determination that makes legends out of ordinary men, they effected a daring rescue and fought a pitched battle at considerable cost. Many brave deeds were done that day and Captain Poindexter tried to make sure his men were recognized for their actions.

Thirty years later Poindexter was made aware that his award recommendations and even the records of the battle had somehow gone missing. Thus began the second phase of this remarkable story: a "battle" to ensure that his brave men's accomplishments would never be forgotten again.

The full circle was completed when President Obama stepped to the podium on October 20, 2009, to award the Alpha Troop with the Presidential Unit Citation: the highest combat award that can be given to a military unit.

“A riveting account of one of the most extraordinary and courageous rescues in U.S. military history. Blackhorse Riders is written with enough detail to satisfy even the most particular of military historians, yet Keith’s compelling storytelling breathes life into the personalities involved, so that minute by minute, following both rescuers and rescued, you keep turning pages to find out who lives and who dies.”

—Karl Marlantes, New York Times bestselling author of Matterhorn and What It Is Like to Go to War

“One of the finest and best-told combat stories to come out of Vietnam. Blackhorse Riders is a portrait of men at war; reluctant soldiers in an unpopular conflict whose actions on a single day rose to the level of extraordinary heroism, courage, and sacrifice. For those of us who were there, this is the kind of book we would be proud to pass on to our children.”

“This gripping, vividly detailed narrative finally tells a story that was overlooked for far too long, a story of nail-biting action and Band of Brothers--like courage. Blackhorse Riders is a bold tale, well told, of heroism, rescue, and, finally, recognition.”

PHILIP KEITH became a naval aviator after graduating from Harvard. During three tours in Vietnam he was awarded, among other decorations, the Presidential Unit Citation, the Air Medal for Gallantry, the Purple Heart, and the Navy Commendation Medal. Keith is also a columnist for the Southampton Press and a feature writer for magazines. He lives in Southampton, Long Island.
Loading...
or
Not Currently Available for Direct Purchase