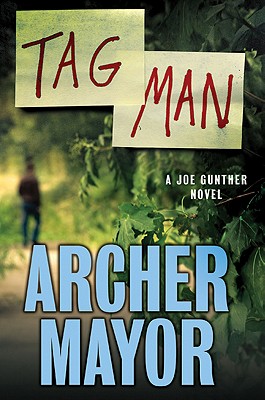 
Across Brattleboro, Vermont, rich people (some with dark secrets) are waking up in their high security, alarm-equipped homes to find a Post-it note stuck to their bedside tables reading, "You're it." There is little sign of disturbance anywhere, nothing stolen (that anyone admits,) and only a bit of expensive food eaten as a signature. The Press loves the story and dubs the burglar the Tag Man.

But who is he? And what’s he actually doing? In fact, he’s quickly running for his life, for what he discovers in one of these houses appears to be proof of a heinous string of murders. But is it? Joe Gunther, struggling to recover from a devastating personal loss, leads his VBI team to untangle the many conflicting pieces of evidence, while the burglar himself struggles for survival in the no-man’s-land between the police and the villains. With no one knowing what to believe, or who to trust, with Tag Man running for his life in a way he never imagined possible, as no one knows who’s watching as they sleep, or who truly did what, the Tag Man is critically acclaimed author Archer Mayor at his very finest.

ARCHER MAYOR is a death investigator, a sheriff's deputy, and a volunteer firefighter and EMT in addition to being a novelist. He lives in Newfane, Vermont.
Loading...
or
Not Currently Available for Direct Purchase