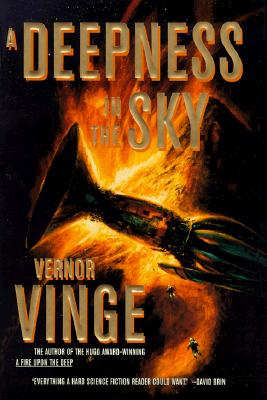 A Deepness in the Sky

After thousands of years searching, humans stand on the verge of first contact with an alien race. Two human groups: the Qeng Ho, a culture of free traders, and the Emergents, a ruthless society based on the technological enslavement of minds.The group that opens trade with the aliens will reap unimaginable riches. But first, both groups must wait at the aliens' very doorstep for their strange star to relight and for their planet to reawaken, as it does every two hundred and fifty years....Then, following terrible treachery, the Qeng Ho must fight for their freedom and for the lives of the unsuspecting innocents on the planet below, while the aliens themselves play a role unsuspected by the Qeng Ho and Emergents alike.More than just a great science fiction adventure, A Deepness in the Sky is a universal drama of courage, self-discovery, and the redemptive power of love. A Deepness in the Sky is a 1999 Nebula Award Nominee for Best Novel and the winner of the 2000 Hugo Award for Best Novel.

Born in Waukesha, Wisconsin and raised in Central Michigan, science fiction writer Vernor Vinge is the son of geographers. Fascinated by science and particularly computers from an early age, he has a Ph.D. in computer science, and taught mathematics and computer science at San Diego State University for thirty years.

He has won Hugo Awards for his novels "A Fire Upon the Deep" (1992) and "A Deepness in the Sky" (1999), and for the novella "Fast Times at Fairmont High" (2001). Known for his rigorous hard-science approach to his SF, he became an iconic figure among cybernetic scientists with the publication in 1981 of his novella "True Names," which is considered a seminal, visionary work of Internet fiction.

He has also gained a great deal of attention both here and abroad for his theory of the coming machine intelligence Singularity. Sought widely as a speaker to both business and scientific groups, he lives in San Diego, California.
Loading...
or
Not Currently Available for Direct Purchase