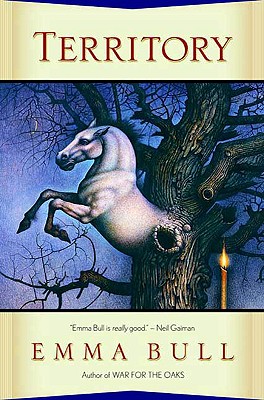 Wyatt Earp. Doc Holliday. Ike Clanton.
You think you know the story. You don't.
Tombstone, Arizona in 1881 is the site of one of the richest mineral strikes in American history, where veins of silver run like ley lines under the earth, a network of power that belongs to anyone who knows how to claim and defend it.
Above the ground, power is also about allegiances. A magician can drain his friends' strength to strengthen himself, and can place them between him and danger. The one with the most friends stands to win the territory.
Jesse Fox left his Eastern college education to travel West, where he's made some decidedly odd friends, like the physician Chow Lung, who insists that Jesse has a talent for magic. In Tombstone, Jesse meets the tubercular Doc Holliday, whose inner magic is as suppressed as his own, but whose power is enough to attract the sorcerous attention of Wyatt Earp.
Mildred Benjamin is a young widow making her living as a newspaper typesetter, and--unbeknownst to the other ladies of Tombstone--selling tales of Western derring-do to the magazines back East. Like Jesse, Mildred has episodes of seeing things that can't possibly be there.
When a failed stage holdup results in two dead, Tombstone explodes with speculation about who attempted the robbery. The truth could destroy Earp's plans for wealth and glory, and he'll do anything to bury it. Meanwhile, outlaw leader John Ringo wants the same turf as Earp. Each courts Jesse as an ally, and tries to isolate him by endangering his friends, as they struggle for magical dominance of the territory.
Events are building toward the shootout of which you may have heard. But you haven't heard the whole, secret story until you've read Emma Bull's unique take on an American legend, in which absolutely nothing is as it seems...

"Emma Bull is one of the best writers working today."
--Steven Brust on Emma Bull

"A delightful bit of alchemy that deftly blends the detective and fantasy genres . . . The tragedy seeps through the thrills, humor, and relationships so slowly that one finds the tears on one's cheeks with a shock."
--School Library Journal on Finder

"Resembling the works of Tolstoy and Dickens in the plethora of characters, Stoker and Mary Shelley in the exposition, the novel brings together intrigue, adventure, politics, and magic in a complex epic that astonishes the reader."
--Library Journal on Freedom and Necessity

"Original and convincing…One to read for the sheer wonder of seeing a master storyteller at work."
--Chicago Sun-Times on War for the Oaks

"Knifes through the fantasy genre like a sharp blade of wind."
--Charles de Lint on War for the Oaks

Emma Bull's "War for the Oaks" won the "Locus" Award for Best First Novel. Her subsequent works have included "Falcon, "the Hugo, Nebula, and World Fantasy Award-finalist "Bone Dance, Finder, " and (with Steven Brust) "Freedom and Necessity." She lives in Tucson, Arizona.
Loading...
or
Not Currently Available for Direct Purchase