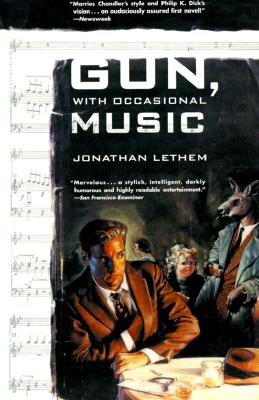 Conrad Metcalf has problems. He has a monkey on his back, a rabbit in his waiting room, and a trigger-happy kangaroo on his tail. (Maybe evolution therapy is not such a good idea.)

He's been shadowing Celeste, the wife of an affluent Oakland urologist. Maybe falling in love with her a little at the same time. When the doctor turns up dead, Metcalf finds himself caught in a crossfire between the boys from the inquisitor's Office and the gangsters in the back room of the Fickle Muse.

Jonathan Lethem's first novel is a science fiction mystery. It's funny. It's not so funny.

Praise For Gun, With Occasional Music…

Jonathan Lethem was born in New York in 1964. His novel "Motherless Brooklyn" won the National Book Critic's Circle Award for Fiction. His books include "Girl in Landscape," "As She Climbed Across the Table," "Amnesia Moon" and "Gun, With Occational Music."
Loading...
or
Not Currently Available for Direct Purchase