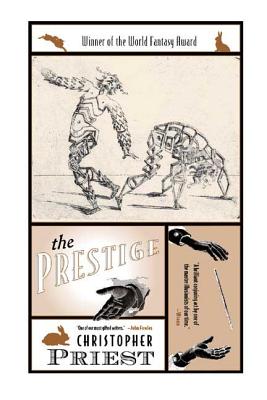 Winner of the World Fantasy Award

In 1878, two young stage magicians clash in the dark during the course of a fraudulent séance. From this moment on, their lives become webs of deceit and revelation as they vie to outwit and expose one another.

Their rivalry will take them to the peaks of their careers, but with terrible consequences. In the course of pursuing each other's ruin, they will deploy all the deception their magicians' craft can command--the highest misdirection and the darkest science.

Blood will be spilled, but it will not be enough. In the end, their legacy will pass on for generations...to descendants who must, for their sanity's sake, untangle the puzzle left to them.


Praise For The Prestige…

“A brilliant conjuring act by one of the master illusionists of our time.” —Wired on The Prestige

“One of our most gifted writers.” —John Fowles on The Prestige

“Extraordinary--like a dazzling magic act!” —Entertainment Weekly on The Prestige

“A dizzying show of a novel....Imagine Possession rewritten by Barbara Vine, or Robertson Davies at his most smoothly diabolical. A brilliantly constructed entertainment!” —The Washington Post on The Prestige

“As ingenious as it is suspenseful.” —Newsday on The Prestige

“Nothing quite prepares you for the sinister complexity and imaginative flair of The Prestige . . . Magnificently eerie.” —Anthony Quinn, The Sunday Times

“Beautifully written . . . Two magicians vie with each other to create the perfect illusion: vanishing from one part of the stage and reappearing instantaneously in another. It's a story of utter fakery and scientific audacity. The pioneer of electrical power, Nikola Tesla, appears in a supporting role; to say more would reveal too much. Priest masters the merging of SF and mainstream, and The Prestige is his finest novel to date.” —New Scientist on The Prestige

“A taut, twisting, prize-winning story of two magicians and their fierce fin-de-siècle rivalry that taints successive generations of their respective families...An unexpectedly compelling fusion of weird science and legerdemain.” —Kirkus on The Prestige

“Remarkably akin to the style of the late Robertson Davies...Priest has brought it off with great imagination and skill.” —Publishers Weekly on The Prestige

“The Prestige is in every way a marvelously scary entertainment with one of the creepiest final revelations in recednt years. Don't miss the magic show!” —Gahan Wilson, Realms of Fantasy

“Just as a magic act should be: filled with haunting marvels.” —Time Out London on The Prestige

Christopher Priest is the critically-acclaimed author of the 1995 World Fantasy Award-winning novel, The Prestige (whose 2006 film adaptation of the same namesake went on to be a two-time Academy Award nominated box office hit). Born in Cheshire, England, Priest has spent most of his life as a full-time freelance writer. He currently lives on the Isle of Bute, in west Scotland.

Historic and literary “family feuds” range from Shakespeare’s Montagues and Capulets to the Hatfields and McCoys. Could the Angiers and Bordens have ended theirs at some point, or was it predestined to continue through the years? Must the sins of the fathers be passed to other generations? Did the feud join the families as much as it separated them?

The use of the ampersand (&) instead of the word “and” is one way in which the author differentiates between the two “voices” in Borden’s book. What are some others? Do such devices make the story easier to comprehend, or confuse the reader even further?

Noting that Angier’s clients derive genuine comfort from his fraudulent séances, Borden asks, “Was any of this so different from the pleasurable mystification a magician gives to his music hall audience?” Do you agree? Do such séances help or hurt the participants?

Both Angier and Borden routinely cheat on their wives. What does this say about their characters in general? Is it more likely in those “whose very profession is deception?”

Borden recounts the story of Ching Ling Foo, who affected a shuffling gait onstage and off to protect his greatest illusion. To what lengths does Borden go to conceal the secret of The New Transported Man? Does he lie to himself, as well as to the outside world?

The Prestige exemplifies Priest’s self-described “fascination with doppelgangers and twins.” What are some of the ways in which this theme is incorporated, either overtly or subtly? Do you see Angier and Borden as opposite sides of the same coin?

Classics like Alexandre Dumas père‘s The Corsican Brothers depict twins as having a unique, almost telepathic bond. Do you believe that such a bond really exists? In what ways does Priest play with the traditions and expectations associated with this concept?

As in Akira Kurosawa’s film Rashomon, Priest sometimes depicts the same events from multiple perspectives, especially the incident that sets the feud into motion. Did you trust one account more than the other? Why? Does subjectivity always affect our perception?

Many critics have compared the writing of The Prestige to a feat of magic in itself. Do you agree? In what ways do the style, structure, and showmanship of the novel mirror those of magicians? Does Priest play fair with the reader? Did you guess his “secrets?”

Priest uses real-life electrical pioneer Nikola Tesla (1856-1943) as a character, depicting him as a bitter rival of Thomas Edison’s. Does Priest portray Tesla accurately? Does the use of such historical figures make a story more believable for you, or is it a distraction?

Angier calls Tesla “a prophet of what the next century will hold for us.” How does Priest use the turn of the century as a backdrop? Do his characters adapt well to such changes?

The forthcoming film version of The Prestige stars Hugh Jackman and Christian Bale as rival magicians Angier and Borden. With its complex structure and multiple—sometimes unreliable—narrators, does the novel naturally lend itself to adaptation in the first place? How might a screenwriter alter or compress the story to turn the book into a viable script?