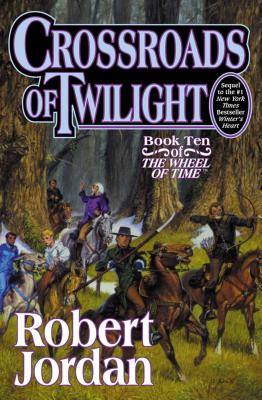 In Crossroads of Twilight, the tenth novel in Robert Jordan’s #1 New York Times bestselling epic fantasy series, The Wheel of Time®, Rand al'Thor and his allies endure trials by fire amidst battles, sacrifices, and treachery.

Perrin Aybara will stop at nothing to free his wife Faile from the Shaido Aiel. Consumed by rage, he offers no mercy to those he takes prisoner. And when he discovers that Masema Dagar, the Prophet of the Dragon, has been conspiring with the Seanchan, Perrin considers making an unholy alliance.

Rand al'Thor, the Dragon Reborn himself, has cleansed the Dark One's taint from the male half of the True Source, and everything has changed. Yet nothing has, for only men who can channel believe that saidin is clean again, and a man who can channel is still hated and feared—even one prophesied to save the world. Now, Rand must gamble again, with himself at stake, and he cannot be sure which of his allies are really enemies.


Praise For Crossroads of Twilight: Book Ten of 'The Wheel of Time'…