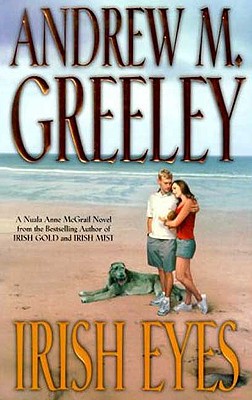 The Dark Beginnings of Sherlock Holmes

Nuala Anne McGrail, that beautiful Irish spitfire, now lives in Chicago with her husband, Dermot, and their new baby, Nellliecoyne. As Nuala fans may suspect, Nelliecoyne is no ordinary baby: she is fey like her mother, and can see into the past as well as the future. Both Nuala and her daughter have had strange vibrations from a place on the lake where a shipload of Irish-Americans lost their lives a hundred years ago. In the course of their investigation, Nuala and Dermot make some dangerous enemies, and eventually have to solve a murder and find a buried treasure. Will Nuala survive the attacks of a sleazy DJ, and a dangerous run-in with the Balkan Mafia? And how does the diary of a young Irish woman at the turn of the century play into these events? Once again, Andrew M. Greeley--that master of the human heart--creates an engaging, charming story that will delight fans young and old.

Priest, sociologist, author and journalist, Father Andrew M. Greeley built an international assemblage of devout fans over a career spanning five decades. His books include the Bishop Blackie Ryan novels, including "The Archbishop in Andalusia," the Nuala Anne McGrail novels, including "Irish Tweed," and "The Cardinal Virtues." He was the author of over 50 best-selling novels and more than 100 works of non-fiction, and his writing has been translated into 12 languages.Father Greeley was a Professor of Sociology at the University of Arizona and a Research Associate with the National Opinion Research Center (NORC) at the University of Chicago. In addition to scholarly studies and popular fiction, for many years he penned a weekly column appearing in the "Chicago Sun-Times" and other newspapers. He was also a frequent contributor to "The New York Times," the "National Catholic Reporter," "America "and "Commonweal," and was interviewed regularly on national radio and television. He authored hundreds of articles on sociological topics, ranging from school desegregation to elder sex to politics and the environment.Throughout his priesthood, Father Greeley unflinchingly urged his beloved Church to become more responsive to evolving concerns of Catholics everywhere. His clear writing style, consistent themes and celebrity stature made him a leading spokesperson for generations of Catholics. He chronicled his service to the Church in two autobiographies, "Confessions of a Parish Priest" and "Furthermore!"In 1986, Father Greeley established a $1 million Catholic Inner-City School Fund, providing scholarships and financial support to schools in the Chicago Archdiocese with a minority student body of more than 50 percent. In 1984, he contributed a $1 million endowment to establish a chair in Roman Catholic Studies at the University of Chicago. He also funded an annual lecture series, "The Church in Society," at St. Mary of the Lake Seminary, Mundelein, Illinois, from which he received his S.T.L. in 1954.Father Greeley received many honors and awards, including honorary degrees from the National University of Ireland at Galway, the University of Arizona and Bard College. A Chicago native, he earned his M.A. in 1961 and his Ph.D. in 1962 from the University of Chicago.Father Greeley was a penetrating student of popular culture, deeply engaged with the world around him, and a lifelong Chicago sports fan, cheering for the Bulls, Bears and the Cubs. Born in 1928, he died in May 2013 at the age of 85.
or
Not Currently Available for Direct Purchase
Copyright © 2020 American Booksellers Association