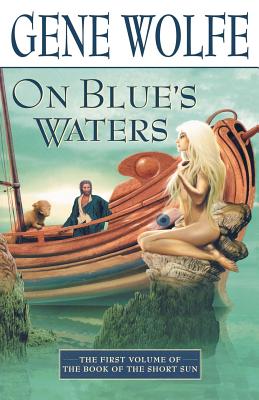 Volume One of 'The Book of the Short Sun'

On Blue's Waters is the start of a major new work by Gene Wolfe, the first of three volumes that comprise The Book of the Short Sun, which takes place in the years after Wolfe's four-volume Book of the Long Sun.

Horn, the narrator of the earlier work, now tells his own story. Though life is hard on the newly settled planet of Blue, Horn and his family have made a decent life for themselves. But Horn is the only one who can locate the great leader Silk, and convince him to return to Blue and lead them all to prosperity. So Horn sets sail in a small boat, on a long and difficult quest across the planet Blue in search of the now legendary Patera Silk. The story continues in In Green's Jungles and Return to the Whorl.

"By any standard, Wolfe's beautifully composed, meditative, thrilling, and tricky-beyond-belief 'science fantasy' is a work of the highest art."--The Washington Post Book World