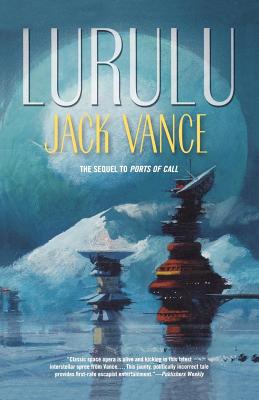 Rejoin Myron Tany and the crew of the space freighter Glicca as they ply their way from planet to planet, star to star, and adventure to adventure. Each of them is there by chance, and each has a secret quest. From one world to the next, they will chase their dreams of revenge and fulfillment.

“Now in his seventh decade of writing sf, Vance shows no sign of stinting either his impeccable style or storytelling mastery. Vance makes his story a vehicle for inventing distinctive alien cultures and unforgettably vivid characterizations.” —Booklist

“The sequel to SFWA Grand Master Vance's Ports of Call (1998) continues the adventures of Myron Tany in a headlong rush of droll vignettes in the spirit, if not with the depth, of Gulliver's Travels. Abandoned by his great-aunt for dawdling while piloting her space-yacht toward the distant world of Naharius, Myron now handles cargo aboard the interstellar freighter Glicca for Capt. Adair Maloof and his slightly shady crew and its passengers. The freighter wanders wherever its cargo may take it, guided by the frequently incorrect 'Handbook of the Planets'. Along the way Myron learns about "lurulu," "a special word from the language of myth," which may best be translated as the achievement of your heart's desire.” —Publishers Weekly