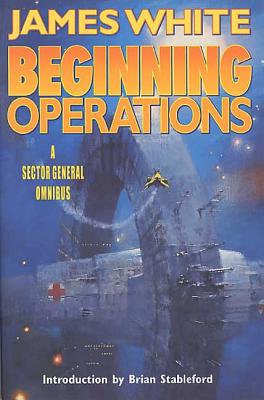 Sector General: A massive deep-space hospital station on the Galactic Rim, where human and alien medicine meet. Its 384 levels and thousands of staff members are supposedly able to meet the needs of any conceivable alien patient--though that capacity is always being strained as more (and stranger) alien races turn up to join the galactic community. Sentient viruses, interspecies romances, undreamed-of institutional catering problems--it all lands on Sector General's doorstep. And the only thing weirder than a hitherto unknown alien species is having a member of that species turn up in your Emergency Room.

The first of two omnibus volumes reprints the works that began the Sector General series, which were previously published as Hospital Station (1962), Star Surgeon (1963), and Major Operation (1971).

“Sector General is one of the few places in SF that one would really, really like to exist.” —David Langford

“Over the years White has built a large and enthusiastic audience for his Sector General series, which concerns a fully realized interspecies hospital on the rim of the Galaxy. His fascinating cast of characters and his belief in the basic decency of all intelligent life-forms have seen him through six Sector General books over the past quarter century.” —James Gunn, The New Encyclopedia of Science Fiction

“Neat, humorous, and humane.” —The Ultimate Guide to SF

James White lived in Northern Ireland. He was a popular writer of science fiction for over forty years. His books include the Sector General series, starting with Hospital Station, Star Surgeon, and Major Operation, which are collected in the omnibus Beginning Operations. He died in 1999.