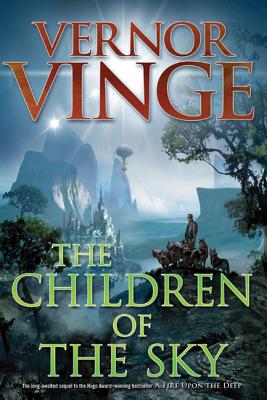 The Children of the Sky

After nearly twenty years, Vernor Vinge has produced an enthralling sequel to his memorable bestselling novel "A Fire Upon the Deep."

Ten years have passed on Tines World, where Ravna Bergnsdot and a number of human children ended up after a disaster that nearly obliterated humankind throughout the galaxy. Ravna and the pack animals for which the planet is named have survived a war, and Ravna has saved more than one hundred children who were in cold-sleep aboard the vessel that brought them.

While there is peace among the Tines, there are those among them and among the humans who seek power and no matter the cost, these malcontents are determined to overturn the fledgling civilization that has taken root since the humans landed.
On a world of fascinating wonders and terrifying dangers, Vernor Vinge has created a powerful novel of adventure and discovery that will entrance the many readers of "A Fire Upon the Deep." Filled with the inventiveness, excitement, and human drama that have become hallmarks of his work, this new novel is sure to become another great milestone in Vinge's already stellar career.

One of "Library Journal"'s Best SF/Fantasy Books of 2011.


Praise For The Children of the Sky…

Advance praise for The Children of the Sky:

“Imagine bootstrapping a fallen civilization into transcendence using nothing but a collection of hive-mind Machiavellis, a crippled hyperadvanced spaceship, and a pack of surly, scheming orphaned adolescents. Oh, and then there’s the vengeful god ramscooping itself to relativistic speeds a mere thirty light years away. Vinge’s explosive imagination and deft storytelling make epics sail past like hummingbirds—you’ll steal daytime moments to read more, and lie awake at night contemplating what you’ve read.” —Cory Doctorow, bestselling and award-winning author of Little Brother

“Vernor Vinge’s stories and novels have always surprised and entertained me, and The Children of the Sky carries on that grand tradition!” —Greg Bear, bestselling author of Hull Zero Three

“No one has ever crafted a more complex, fascinating, and strangely realistic alien race than Vernor Vinge’s marvelous Tines.” —David Brin, bestselling author of The Postman and Startide Rising

Raves for A Fire Upon the Deep by Vernor Vinge

“This is big-scale science fiction at its best."  —The Denver Post

“There are not too many novels that leave this reader screaming violently for more. Vernor Vinge's has done so." —Locus

"When I was young and had to write my address in a school notebook, I would begin with my street and apartment number and then go on through city, county, state, country and continent in a litany of ever more grandiose place names that did not end until I reached ‘Earth, Solar System, Milky Way Galaxy, The Universe.’ In those days, it thrilled me that my small corner of the Bronx was just one part of the vastness I could see in the sky at night. This is the feeling I got from reading A Fire Upon the Deep by Vernor Vinge.” —New York Times Book Review

“No summary can do justice to the depth and conviction of Vinge's ideas. The overall concept astonishes; the aliens are developed with memorable skill and insight; the plot twists and turns with unputdownable tension. A masterpiece of universe-building.” —Kirkus Reviews, Starred Review

“Though Vinge's galaxy is huger than one can begin to grasp, it is, at the same time, entirely seeable in the mind's eye. To find out how he does this trick, how he has managed to create a setting intimate enough to hold a single tale and big enough to tell a thousand, just read the book." —John Clute, Interzone

Vernor Vinge has won five Hugo Awards, including one for each of his last three novels, A Fire Upon the Deep (1992), A Deepness in the Sky (1999), and Rainbow's End (2006). Known for his rigorous hard-science approach to his science fiction, he became an iconic figure among cybernetic scientists with the publication in 1981 of his novella "True Names," which is considered a seminal, visionary work of Internet fiction. His many books also include Marooned in Realtime and The Peace War.Born in Waukesha, Wisconsin and raised in Central Michigan, Vinge is the son of geographers. Fascinated by science and particularly computers from an early age, he has a Ph.D. in computer science, and taught mathematics and computer science at San Diego State University for thirty years. He has gained a great deal of attention both here and abroad for his theory of the coming machine intelligence Singularity. Sought widely as a speaker to both business and scientific groups, he lives in San Diego, California.
Loading...
or
Not Currently Available for Direct Purchase