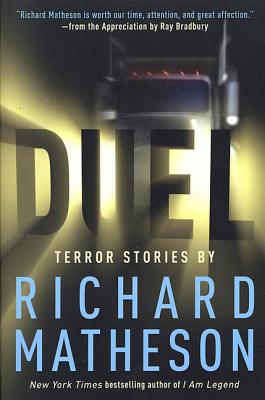 Duel, Steven Spielberg's acclaimed first film, was adapted by Richard Matheson from his unforgettable story of the same name.

But "Duel" is only one of the classic suspense tales in this outstanding collection of stories by the Grand Master of Horror, which also contains Matheson's legendary first story, "Born of Man and Woman," as well as several stunning shockers that inspired memorable episodes of The Twilight Zone, including "Little Girl Lost," "Steel," and "Third from the Sun."

Like Matheson's previous collection, Nightmare at 20,000 Feet, this collection is an indispensable treasure trove of terror from the New York Times bestselling author of I Am Legend and What Dreams May Come.

“Richard Matheson is worth our time, attention, and great affection.” —from the Appreciation by Ray Bradbury

Richard Matheson (1926-2013) is the author of many classic novels and short stories. He wrote in a variety of genres including terror, fantasy, horror, paranormal, suspense, science fiction and western. In addition to books, he wrote prolifically for television (including The Twilight Zone, Night Gallery, Star Trek) and numerous feature films. Many of Matheson’s novels and stories have been made into movies including I Am Legend, Somewhere in Time, and Shrinking Man. His many awards include the World Fantasy and Bram Stoker Awards for Lifetime Achievement, the Hugo Award, Edgar Award, Spur Award for Best Western Novel, Writer’s Guild awards, and in 2010 he was inducted into the Science Fiction Hall of Fame.

Ray Bradbury (1920-2012) was one of science fiction's greatest luminaries. The author of such classic, important works as Fahrenheit 451, The Martian Chronicles, and Something Wicked This Way Comes, Bradbury was honored in 2007 with a Pulitzer citation "for his distinguished, prolific and deeply influential career as an unmatched author of science fiction and fantasy." Other distinctions include a 1954 honor from the National Institute of Arts and Letters, a Medal for Distinguished Contribution to American Letters from the National Book Foundation in 2000, and the National Medal of Arts, awarded by President George W. Bush and Laura Bush in 2004. He was also an Emmy Award-winning screenwriter. Born in Waukegan, Illinois in 1920, Bradbury spent most of his life in Los Angeles, where he passed away in 2012.
Loading...
or support indie stores by buying on