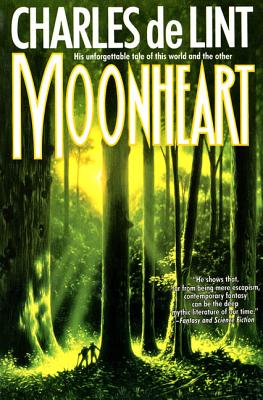 When Sara and Jamie discovered the seemingly ordinary artifacts, they sensed the pull of a dim and distant place. A world of mists and forests, of ancient magics, mythical beings, ageless bards...and restless evil.

Now, with their friends and enemies alike--Blue, the biker; Keiran, the folk musician; the Inspector from the RCMP; and the mysterious Tom Hengyr--Sara and Jamie are drawn into this enchanted land through the portals of Tamson House, that sprawling downtown edifice that straddles two worlds.

Sweeping from ancient Wales to the streets of Ottawa today, Moonheart will entrance you with its tale of this world and the other one at the very edge of sight...and the unforgettable people caught up in the affairs of both. A tale of music, and motorcycles, and fey folk beyond the shadows of the moon. A tale of true magic; the tale of Moonheart.

Charles de Lint and his wife, the artist MaryAnn Harris, live in Ottawa, Ontario, Canada. His evocative novels, including Moonheart, Forests of the Heart, and The Onion Girl, have earned him a devoted following and critical acclaim as a master of contemporary magical fiction in the manner of storytellers like John Crowley, Jonathan Carroll, Alice Hoffman, Ray Bradbury, and Isabel Allende.

“He shows that, far from being mere escapism, contemporary fantasy can be the deep mythic literature of our time.” —Fantasy and Science Fiction

“Charles de Lint is a folksinger as well as a writer and it is this voice we hear...both new and old, lyric, longing, touched by magic.” —Jane Yolen

“A finely textured song of a tale of power, wonder, and suspense. Keenly felt, satisfying, fully realized, its essence lingers when the reading's done.” —Roger Zelazny

“Mr. de Lint's handling of ancient folklore to weave into an entirely new pattern has never, to my knowledge, been equalled.” —Andre Norton

“For more than a decade, Charles de Lint has enjoyed a reputation as one of the world's leading fantasists, thanks largely to his enchanting 1984 novel Moonheart.” —Toronto Star