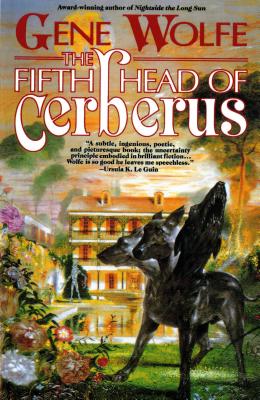 The Fifth Head of Cerberus

Back in print for the first time in more than a decade, Gene Wolfe's The Fifth Head of Cerberus is a universally acknowledged masterpiece of science fiction by one of the field's most brilliant writers.

Far out from Earth, two sister planets, Saint Anne and Saint Croix, circle each other in an eternal dance. It is said a race of shapeshifters once lived here, only to perish when men came. But one man believes they can still be found, somewhere in the back of the beyond.

In The Fifth Head of Cerberus, Wolfe skillfully interweaves three bizarre tales to create a mesmerizing pattern: the harrowing account of the son of a mad genius who discovers his hideous heritage; a young man's mythic dreamquest for his darker half; the bizarre chronicle of a scientists' nightmarish imprisonment. Like an intricate, braided knot, the pattern at last unfolds to reveal astonishing truths about this strange and savage alien landscape.


Praise For The Fifth Head of Cerberus: Three Novellas…

“Gene Wolfe is unique. If there were forty or fifty of this first-rate author--no, let's be reasonable and ask Higher Authorities for only four or five--American literature as a whole would be enormously enriched.” —Chicago Sun-Times

“One of the major fictional works of the decade...Wolfe's novel, with its elusiveness and its beauty, haunts one long after reading it.” —Pamela Sargent

“A richly imaginative exploration of the nature of identity and individuality.” —Malcolm Edwards, The Science Fiction Encyclopedia

“SF for the thinking reader..The style is highly literate and the ideas sophisticated and handled with sensitivity.” —Amazing SF

“One of the 100 best science fiction novels...A truly extraordinary work. One of the most cunningly wrought narratives in the whole of modern SF, a masterpiece of misdirection, subtle clues, and apparently casual revelations.” —David Pringle

BRIAN EVENSON is the author of a dozen books of fiction, including the story collections A Collapse of Horses (Coffee House Press, 2016), Windeye (Coffee House Press 2012) and the novel Immobility (Tor 2012), the latter two of which were finalists for a Shirley Jackson Award. His novel Last Days won the American Library Association's award for Best Horror Novel of 2009). His novel The Open Curtain (Coffee House Press) was a finalist for an Edgar Award and an International Horror Guild Award.
Loading...
or
Not Currently Available for Direct Purchase