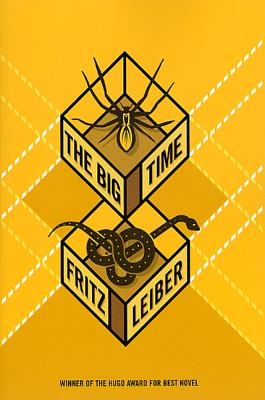 Have you ever worried about your memory, because it doesn't seem to recall exactly the same past from one day to the next? Have you ever thought that the whole universe might be a crazy, mixed-up dream? If you have, then you've had hints of the Change War.

It's been going on for a billion years and it will last another billion or so. Up and down the timeline, the two sides--"Spiders" and "Snakes"--battle endlessly to change the future and the past. Our lives, our memories, are their battleground. And in the midst of the war is the Place, outside space and time, where Greta Forzane and the other Entertainers provide solace and r-&-r for tired time warriors.


Praise For The Big Time…

“An extraordinary tour de force with no equal in the literature of science fiction.” —A Reader's Guide to Science Fiction

“I most urgently recommend this book to you . . . What the entrances, performances and exits of this little mostly human troupe accomplish is a statement about all wars, and all people.” —Algis Budrys

Fritz Leiber, who died in 1992, was one of the most important SF and fantasy writers of the century. The Big Time is his most famous SF novel. "[His] awards for fantasy included the 1975 Grand Master of Fantasy Award, the 1976 World Fantasy Award for Life Achievement, the 1981 Grand Master Award from the Science Fiction Writers of America, 6 Hugos, 4 Nebulas, and about 20 other awards.
Loading...
or support indie stores by buying on