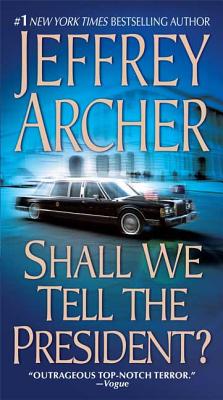 Shall We Tell the President? (Mass Market)

After years of great sacrifice and deep personal tragedy, Florentyna Kane's has finally become the first woman president in America. But on the very day that she is sworn into office, powerful forces are already in motion to take her life.

The FBI investigates thousands of false threats every year. This time, a reliable source has tipped them off about an assassination attempt. One hour later, the informant and all but one of the investigating agents are dead. The lone survivor: FBI Special Agent Mark Andrews. Now, only he knows when the killers will strike. But how can he alone unravel a ruthless conspiracy—in less than one week? The race to save the first woman president begins now…

Praise For Shall We Tell the President?…

“Holds the reader in a vicelike grip.” —Penthouse

“The countdown is the thing; the pace, the pursuit, the what-next…” —Boston Globe

“The only difference between this book and The Day of the Jackal is that Archer is a better writer.” —Chicago Tribune